THE WINDS OF DUNE 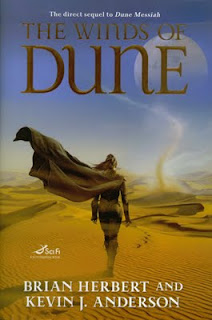 Within every revolution, there exist the seeds of its own destruction. This is the overriding message of this new chapter in the Dune saga begun back in 60s with the release of Frank Herbert’s amazing novel, DUNE. Herbert was a farseeing visionary who extrapolated on the future of mankind, interweaving the politics, religions and economic factors that would shape our tomorrows. His vision was brilliant in that it foresaw our ultimate dependency on fossil fuels as a race and our slow, burgeoning awareness that the health of our very planet was tied to the abuses of that hunger. Only he made it all happen on a world called Arrakis and the oil there was something called spice.

During his lifetime, Herbert wrote five sequels to his bestselling book, ending with CHAPTERHOUSE : DUNE. In 1999, Herbert son’s Brian, and writer Kevin J.Anderson, working from notes left by the author, began a new series of prequel novels that would tell the saga of this universe before the events of DUNE. Since that time they have completed more than a half dozen such books. But with THE WINDS OF DUNE, the two have come back to the original series and taken on the challenging task of filling in some missing gaps left in those early books.

Herbert’s second and third sequels were DUNE MESSIAH and CHILDREN OF DUNE respectively. At the end of the first, young Paul Atriedes, known as the Fremen Prophet Muab’ Dib, has come to realize his empire is corrupt and his own legend a major element of that corruption. Blinded by an assassin’s bomb, Paul makes the hard decision to exit the stage of history and walks off into the deep desert of Arrakis to die, leaving behind his younger sister, the insane Alia, to take control of the empire and the raising of his twin babies, Chani, their mother having died in childbirth. When Herbert returned to the saga with CHILDREN OF DUNE, many years had passed and the twins were young adults, being cared for by Princess Irulan and Paul’s own mother, the Lady Jessica.

It was an abrupt change that left many unanswered questions as to the events that took place immediately after Paul’s exodus and fans have long wondered about those early months following the end of DUNE OF MESSIAH. Now, with this book, they have their answers, as it attempts to fill in that missing time and explain some of the dramatic, early repercussions of the Prophet’s death.

Alia is manic in her desire to protect and preserve everything her brother had created, to the point of obsessive cruelty to all who would dare stand in her way. Hearing of her son’s death, Lady Jessica travels to Arrakis to be of assistance and soon begins to fathom the true moral decay that has infected her son’s regime and the savage legacy Alia is attempting to maintain. The main plot centers about Alia’s attempts to capture a former ally of Paul’s, one Bronso, who has begun writing critical essays denouncing Paul’s godhood and exposing his myth for the fraud it always was. But Lady Jessica is not of the same mind, having been entrusted long ago by her son with a secret so profound, it would destroy any who learned of it. Thus she must somehow honor her son’s memory and fulfill her obligation to him, even if it means conspiring against her own daughter.

THE WINDS OF DUNE is filled with the same psychological complexities that were a hallmark of Frank Herbert’s books. It twists and turns on matters of trust, loyalty and the meaning of honor. Familiar characters are brought back to life with poignant clarity and the suspense and tension never let up. Even knowing what comes next in CHILDREN OF DUNE, I was hooked by this tale and enjoyed it immensely. It is a worthy addition to the DUNE saga.
Posted by Ron Fortier at 11:47 AM

I read the first of the "New" DUNE books when they started coming out and never read another. Sorry, Brian is a good son, but he can't equal his dad's style. I did enjoy the biography he wrote about his father a number of years ago.
So I have to consider the "new" DUNE novels like I consider the "new" STAR WARS movie: fan fiction.

Hi Tim, sorry you aren't into the new books. I personally consider the original DUNE one of the greatest novels ever written, regardless of its genres. Whereas Herbert's own sequels weren't as well done or entertaining. Put alongside these volumes, I think Brian and Kevin hold their own. But then again, its all subjective. Thanks for dropping by, it's appreciated always.

I liked most of the prequel stuff and I was okay with their wrap-up to the Dune saga (though I will *never* believe that Frank intended to end the series by having a big robot war)... but Paul of Dune and this book have made me swear off their future Dune novels. Stating in the Paul that the original novels are just propaganda written by Irulan and thus making the errors and retcons made by Brian and Kevin "the truth" is insulting and I'm surprised you'd be okay with that, Ron. It would be like me being given the keys to Doc Savage and then I reveal that all the Lester Dent stuff was just in-universe pulp stories and *my* stuff is the genuine Doc. Nope. Not gonna support it.

Barry, I did not say in my review that I had read "all" the Dune books by Brian and Kevin. The only such I read, and still like, were the prequel books that all take place before Frank's opus. I have not read any of the books that take place after his run. Meaning I haven't read Paul of Dune or Sandworms of Dune. And as I do value your opinion on such matters, now have no interest in reading them. Still, Winds here does what my review claims, and fills in the gaps between Messiah and Children.

That's cool -- I had assumed you'd read them all and that was obviously my mistake. I'm very passionate about the Dune universe so I may have jumped the gun. I know many Dune fans love the KJA and Brian books and don't have the problems that I do with them -- my decision not to read any more of them is a personal one. If you enjoyed Winds of Dune you might enjoy Paul of Dune more than I did. The Irulan revelation was minor in the context of the novel but when you stop and think about what it means (casting the canon into doubt) it just sat with me the wrong way. Hope I didn't offend you!

No offense taken, Barry. Always great to talk to another DUNE fan. And by that I do mean Frank Herbert's opus. Thanks for stopping by.

I just deleted a comment here a few minutes ago. No, not because of the content, rather because the writer
did not give his name. Sorry, but Anonymous does not cut here. If you wish to leave a comment, and welcome all, both those who agree and disagree with our reviews, then have the basic courtesy to sign your name.
That is not asking much. I will continue to delete any left by Mr.Anonymous.

Hi, I liked Paul of Dune. Yet after, when I had digested what I had read, I began to ask my self if something that F.Herbert once said to his Son, "Keep it new." (Well I think that was what he said, I read it in the Dreamers of Dune biography of Frank Herbert's, by his Son.)
I have began to think that I like returning to familiar ground, that is why I keep reading the new books, yet at the back of my mind I feel that something is not right about it, is filling in all the gaps creativity, or is it more like riding on someone else's wave. I don't think there is much "New" in these books.
Possibly in the sand warms of Dune, at the end. Yet I hated how when the sand warms were on the robot planet, Synchrony. How they were not easily subdued by the computer intelligences. Just spray water on them.

I agree that it is lazy to attribute inconsistencies between book series to "character authorship", especially considering the fact that later books in Frank Herbert's series, especially God Emperor, deal directly with this issue. Up until "Winds", I felt that Brian and Kevin hadn't made any choices damaging to the series, in fact, many of the controversial events can be reconciled with Frank's original source material. However, problems with "Paul" and "Winds" are huge, including both Paul and Leto mentioning in the original Dune novel that, before leaving for Arrakis, Paul had never been off planet. I find dialogue in Frank's novels(internal or between characters) to be the most authoritative, as there is no evidence that Irulan even wrote in a narrative style, but in a scholarly essay format, even with "A Child's History of Muad'Dib".

Ive read all the Dune novels not in the original publication date, rather i read them starting with the Butlerian Jihad and so on... I have to say that KJA and Brians prequels were great and made me keep reading them. I personally hope to see a novel describing Leto II's transformation into the worm: God Emperor of Dune!! Or even just what the hell happened to Vor Atreides!
Rock on Kevin and Brian, tho it seems you were bashed in some of these comments I for one am a huge fan of your Dune novels!!!
Tim McGuire, Ocala, FL

Comparing Kevin's and Brian's work to the original Dune is like comparing a playboy photo to works of Da Vinci. K&B novels are unreadable, superstitious, and flat - lowest of the science fiction. "Dune" itself was pretty good - a rare thing among science fiction novels. Except for Herbert, only Dick and Vonnegut are worth reading in my honest opinion. The rest is cheap entertainment.