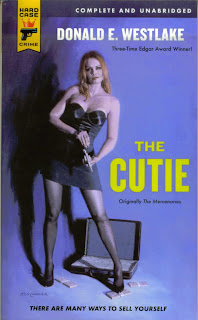 The late Donald E. Westlake was named a Grand Master by the Mystery Writers of America in 1993, the highest honor bestowed a mystery writer. During the course of his life (12 July 1933 – 31 December 2008) he won their prestigious Edgar Award three times in three different categories; in 1968 for Best Novel, God Save the Mark, in 1990 for Best Short Story, Too Many Crooks, and in 1991 for Best Motion Picture Screenplay, The Grifters.

This dandy little thriller was first published in 1960 as The Mercenaries, and it’s Westlake at his best. Like the majority of his crime dramas, The Cutie takes place in New York City, a territory Westlake was highly familiar with and used to color his stories with deft, literary strokes. When a two-bit heroine junkie is framed for the murder of a young actress, the case seems unimportant to mob soldier, George Clayton. As the muscle for underworld boss Ed Ganolese, Clay assumes the murder is inconsequential until Ganolese orders him to find the junkie and hide him from the police. It seems this addict has connections to the Families back in the old country.

In an original twist, Clay takes on the role of detective not only find and protect the falsely accused doper, but at the same time learn who the real killer is and bring him to justice. When another woman is killed and the frame put on Clay, things get personal fast. Soon he’s dodging bullets and cops all the while wondering what was so important about a no-talent actress that would warrant someone crossing swords with the mob.

The plot is straight forward and moves at a good clip, allowing readers ample opportunity to collect the clues along with Clay and in the end come to the logical, well set up denouement. Westlake’s characters all come to life quickly in short, skillful paragraphs and he cleverly layers their personalities with every day moral issues. Clay is not a mindless thug. He’s an intelligent guy, yet he willfully chose a career of crime. Was it the right choice? By the last chapter of this book, his reassessment brings forth some startling revelations that end the book on the perfect pitch note.

The Cutie is terrific crime novel. If I have any quibbles, it is with the beautiful cover by Ken Laager. It has absolutely no bearing on the story, nor is the lethal lovely painted on it in this particular book. Mostly all the Hard Case Crime books’ have featured relevant covers. One or two have not. You can add this one to that short list.
Posted by Ron Fortier at 12:51 PM

Anonymous said...
This comment has been removed by a blog administrator.
12:33 AM

Westlake has been gone only a short time and I'm already missing him. Hard to imagine we won't be getting any more PARKER novels after DIRTY MONEY. But the U. of Chicago is issuing reprints of the originals and they can't be beat. (Note to those unaware: He used the pseudonym "Richard Stark" when he wrote Parker.)

Agreed, Van. Am glad to hear about the U.of Chicago plans. That's great. And of course, am hoping Hard Case Crime will continue to reissue lots of these as well.