HUNT THROUGH THE CRADLE OF FEAR 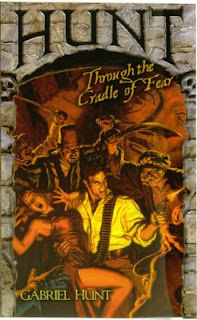 With the second book in this series, creator Charles Ardai becomes Gabriel Hunt, the globe-trotting archeologist. For those of you who came in late, here’s the idea. Ardai , the genius behind the Hard Case Crime books, has invented a modern day pulp hero ala Indiana Jones to mimic the exuberant adventure pulps of the 1930s. He wrote a character bible detailing the history of Hunt and his family and sent it off to five writers inviting each of them to contribute a book to the series, reserving one for himself. In the grand tradition of pulp pen-names, all of the books are credited to the character himself.

Of course with any such series, a formula is quickly established and that becomes a mutual blessing and curse. A blessing in that any reader who picks up any one of these six books and comes away enjoying the experience will most likely like the other five. A curse in that after two or three of them, it’s hard not to second guess what comes next in the tale. In both this and the first book, HUNT AT THE WELL OF ETERNITY, by James Reasoner, Gabriel Hunt comes to the aid of a beautiful woman whose life is in danger because of some knowledge she possesses. In attempting to solve the mystery involved with the woman, Hunt is sent on a continent spanning quest, with each clue discovered leading to as yet another exotic locale. THROUGH THE CRADLE OF FEAR begins in Hungary, jumps to New York and then barrels off to Egypt and Greece before reaching its climax in Shri Lanka.

This time Hunt is involved with the ancient myth of the Sphinx, that bizarre creature made of parts from multiple animals and possessing the head of a man. The villains here believe the riddle of the Sphinx contains information about a powerful weapon capable of immobilizing armies with paralyzing fear. Ardai understands the fast pacing require of this genre and its obvious he had fun devising hair-raising traps for his hero to battle through, all of them coming at break-neck speed. All well and good, but it wasn’t these action sequences that won me over as much as the all too brief glimpses into Gabriel Hunt’s family life.

Gabriel is the oldest of three children whose parents disappeared in a flight over the Mediterranean seven years ago. Now his younger brother Michael runs the Hunt Foundation that bankrolls his archeological expeditions. Shortly after the loss of their parents, their younger sister Lucy vanished. Regardless of whatever case he is involved with, Gabriel Hunt is a haunted man in regards to these losses. When a strange twist of fate allows him to reconnect with one of these three, Hunt’s character takes on a more complex personality which saves him from becoming a cardboard hero caricature. It’s these insights we hope to see more of in the future.

I also appreciated the supernatural elements weaving themselves into the action and found the ending terrific fun. Oh, and Ardai also adds a bonus short story after the Hunt adventure, making this book a really nice buy. This is a good series that seems to be picking up steam with each new entry. Hopefully that will continue when number three appears later this summer. This reader will be keeping an eye out for it.
Posted by Ron Fortier at 6:43 AM

I'm really looking forward to reading this one.

Hi James, thanks for stopping by.
And let me say, your HUNT AT THE WELL OF ETERNITY was just as much fun. Hope you got to check my review of that from a few weeks back.
All of you involved with this series are really hitting'em out of the park.

Mark Justice said...
This comment has been removed by the author.
2:43 PM

Great review, Ron. I'm jealous that I have to wait until late July to read it. :^)

Hi Mark. Hey, you should be grateful actually. My ARC copy listed Aug. as the release date. But after it was sent me, Charles had a change of heart and moved it up to July. Good stuff, you'll love it.