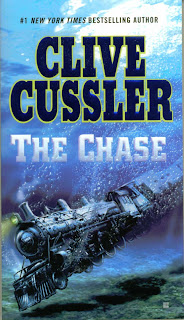 THE CHASE
By Clive Cussler
A Berkley Novel
448 pages

This is the best Clive Cussler book I have ever read. No sense mincing words here. Twenty years ago fellow pulp fiction enthusiasts turned me on to Cussler’s adventure series starring an underwater engineer named Dirk Pitt who traveled the world’s seas in the service of an organization known as NUMA. I recall reading what was, by then, the fifth book in that series and instantly becoming hooked on these new, modern day pulp thrillers. I immediately picked up the previous four books, read and enjoyed every single one and was by then a bona fide Dirk Pitt fan.

Over the years Cussler, and his editors, have turned the Pitt books into a very successful cottage industry, actually spinning off two other series with the aid of other writers working with the author; the Kurt Austin adventures and the Oregon Files. All of which have made Cussler one of the most popular pulp writers in America today. He has millions of fans around the world and his books become instant bestsellers the day they reach bookstore shelves. Which is why THE CHASE almost slipped under my radar of personal interest. I saw it in a store, realized it was a Cussler book I had not read, bought it and then stuck it on stack of to-read titles in my office.

Of course as much as I love Cussler’s books, after having read two dozen of them over the past twenty years, it is hard to get overly excited about a new one. Rather they’ve taken on the guise of familiar friends you know will provide you with some fun, but not a whole lot of new experiences. I could not have been more wrong about this particular title and am now kicking myself for not having read it sooner.

My first surprise was that THE CHASE is not a Pitt book, nor a part of the other two series mentioned previously. It actually appeared to be a stand-alone offering. My curiosity piqued, I began reading the prologue and before I knew it, I was completely yanked into the narrative as if hypnotized. Once begun, I could not put this book down, it captivated me. THE CHASE is an historical crime adventure that takes place in the early years of the Twentieth Century. A cunning villain is robbing small western banks. At the same time he kills all the eye witnesses, be they man, woman or child. Thus the local law enforcement agencies are left clueless. Not only are his robberies bold and bloody, but he also manages to elude his pursuers and simply vanishes without a trace after each strike.

Enter the book’s protagonist, Isaac Bell, a renown agent of the Van Dorn Detective Agency, a pseudo Pinkerton organization, which has been tasked by the Federal Government to find the “Butcher Bandit” and end his reign of terror. Bell is a unique, clever individual who realizes he is at a great disadvantage as he begins his hunt for the phantom-like outlaw. He quickly assembles a team of agents and operating from the company’s Denver office, begins a methodical campaign to uncover even the most insignificant clues to aid him in both identifying his prey and ultimately bringing him to justice. Cussler weaves a grand tale that masterfully captures the mood and feelings of the times. In the early 1900s, America was on the cusp of a technological golden age, what with the advent of automobiles and electricity, it seemed the old frontiers were quickly being civilized by the marvels of the new. From Denver to San Francisco and many small western hamlets in between, Bell and his men begin beating the bushes. Meanwhile the wily criminal, whose identity is another original twist, soon becomes aware of their presence and sets about plotting their murders. The deadly cat and mouse game begins to take on a frantic pace that is filled with suspense. From a mad car versus locomotive race along the coast of southern California, to the horrendous San Francisco earthquake, Bell’s epic manhunt culminates in a fantastic train chase through the Rocky Mountains that had this reader whipping through the book’s last quarter to reach the amazing finale.

Detective Isaac Bell is a great character and easily Clive Cussler’s greatest literary achievement. After a truly magnificent career, THE CHASE, in this humble reader’s opinion, is his masterpiece, and that is not a statement I make lightly.
Posted by Ron Fortier at 7:20 AM

Michael Brown said...
This comment has been removed by the author.
4:19 PM

Like some pulp fans, I first got turned on to Cussler when I read comments of his character being a sort-of modern 'Doc Savage' (this when new Docs were getting harder to find). I think this was the early or mid-90s, so I went back and got his earlier works first and read them and enjoyed them.

I've been getting them ever since. And I would say that reading Cussler has turned me on to other 'techno thriller' authors such as James Rollins, Jack Du Brul (before he teamed up with Cussler), Craig Dirgo, and even Preston & Child (mainly Pendergast, but their other works as well as many of Preston's solo work). Anyway.

I knew about "The Chase", but was just waiting for the paperback editions (ok, so I'm cheap). I enjoyed it, and found it a great change of pace from the NUMA-based ones. Other fans don't seem to have loved it as much.

However, it looks like there will be another Isaac Bell book this November called "The Wrecker", set in 1907. He's teamed up with another writer (Justin Scott), so prehaps we're seeing the launch of yet another series ala NUMA Files & Oregon Files.

Michael, the only hardback books I read are those sent to me by publishers for review. Ha. Been reading paperbacks since a teenager and have no intention of stopping.
A colleague, after reading this review, also told me about Isaac Bell returning in THE WRECKER. I'm truly delighted, as I'd very much like to see him again. But I hope not often to the point of diluting him so that he becomes routine.

Also been reading paperbacks since I was a teenager. I rarely get hardbacks. I'll usually wait for the paperbacks (a few series I've been very annoyed at how slow they've been to come out in paperback, like the Repairman Jack series).

Even when they are on sale, hardbacks are 2-3x the price of paperbacks. That means I'd have to give up getting 2 or 3 additional books. Pass.

Cussler seems to be coming out with one new book in each series a year. I think that would be a good pace.

Anonymous said...
This comment has been removed by a blog administrator.
10:56 AM