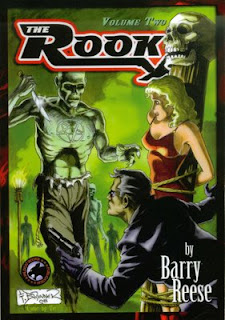 After enjoying Reese’s first collection of stories starring his original pulp character, the Rook, I was anxious to get into this new volume which sports a terrific Frank Brunner cover. The book contains six fast paced, action heavy stories of Max Davies, a man psychology scarred as a boy when he saw his father gunned down by hoodlums. Davies, in the vein of the classic Bruce Wayne/Batman mold, travels across the globe as he matures and learns all the sciences and fighting skills he will require in his campaign to combat evil and injustice.

These are classic hero pulp yarns set in the 30s and 40s and told in the manner of those great digest mags. One of Reese’s strengths as a writer is his ability to reinvent iconic pulp figures in a whole new light. An example of that in this collection is his debut of the Russian hero, Leonid Ksalov, clearing meant to be a new version of Doc Savage. He’s a great character and another helpful ally to the Rook in his war against the agents of darkness.

Which brings us to this series’ overriding theme, occult and supernatural threats. Unlike other classic pulp vigilantes who battled mobsters and would-be world rulers, the Rook takes on the bizarre, other-worldly foes like vampires, immortal Chinese madmen, zombies and even a baby blood-sucker at one point. Ghosts abound in every adventure and one quickly learns that the Rook’s world is a very scary and menacing one. Yet with the help of his lovely wife Evelyn, a one-time movie B-queen, McKenzie the local sheriff and now Leonid Kaslov, the Rook still manages to overcome the forces of evil and win the day.

So in the end, this volume is even better than the first. Although you don’t need to read the first to enjoy it, I’m betting once you delve into the Rook’s adventures, you’ll most likely want to collect all of them. I sure do.
Posted by Ron Fortier at 8:56 AM

Certainly sounds like a lot of fun to read! And that cover's a knockout. I will look into this.

Thanks for stopping by, Van. Barry's a super writer and his pulp fiction is tops.

Thanks, Ron. I personally think volume 3 is the best in the series but a number of my readers have tagged the second one as their fave. When I'm done writing volume of the Rook (I'm 2/3 of the way through now), a Leonid Kaslov solo series is certainly something I'm considering.

Thanks for stopping by, Barry. And for my regular readers, stick around. I do have ROOK Vol III,and will eventually get around to reading and reviewing it. That stack of books does go down...ha.
Meanwhile, I think Kaslov is such a cool pulp hero,I'm sure he would
be great to star in his own adventures. Regardless, you keep penning them, Barry, and we'll keep reading.

I too will seek this one out -Amazon here I come.