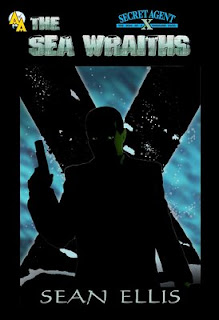 Sometimes when a certain writer latches on to a particular character sparks fly. It is as if the two were meant to hook up in the grand cosmic scheme of things literary. Thus is the case with this book. Sean Ellis, a new and exciting thriller writer, first discovered the pulp hero, Secret Agent X, several years ago while contributing to an anthology featuring “the Man of a Thousand Faces.” This B-pulp hero was created back in the 1930s by veteran pulp writer Paul Chadwick for his own title, under the pseudonym Brant House. Chadwick wrote the character’s bible and first half dozen adventures. There would be a total of forty-five in all before the title ended.

Secret Agent X is a lone agent who, although sponsored by a cabal of wealthy Americans, chooses his own assignments in defending America from evildoers. His greatest skill is his mastery of disguise and only one other person has ever seen his real face, the beautiful reporter Betty Dale, who is X’s ally and lover. Although never quite as popular as the top tier heroes ala the Shadow and Doc Savage, Secret Agent X captured a strong following which remains loyal to this day.

THE SEA WRAITHS is a well written two-fisted, fast paced adventure book. When cargo ships begin disappearing mysteriously in the North Atlantic, America’s top agent launches his own investigation which soon reveals ties to organized crime. But that is only the beginning. He soon discovers other clues that lead him to Nazi Germany and a one on one confrontation with the devil incarnate himself, Adolf Hitler!! Perhaps the most ambitious Secret Agent X tale ever conceived, Ellis brings to it modern day sophistication while at the same time remaining faithful to the traditional pulp trappings of exotic locales, amazing super weapons and daring-do last minutes escapes by a stalwart hero battling against impossible odds. He gives old pulp fans a real treat while at the same time satisfying new readers meeting X for the very first time.

And I certainly can’t think of a better way to do so than with this book. THE SEA WRAITHS is pulp fiction at its finest! Here’s hoping Ellis has a few more X tales to spin.
Posted by Ron Fortier at 8:04 AM

As you know, Ron, I had the opportunity to read this book in manuscript form and think it's one of the finest NEW pulp stories I've read in the last few years of designing and illustrating pulp books. It's an exciting page-turner that has the reader wondering "is he?"-- "is that?" until the "reveal." Just a stunning read that anyone who loves to read pulp books should pick up. I really like the character Secret Agent X and I really enjoyed this book.

We're agreed completely, Rob. In fact, I'm predicting right now that in the not too distance future we'll be seeing Sean Ellis' name on the New York Times bestseller list. He is truly an exceptional writer.