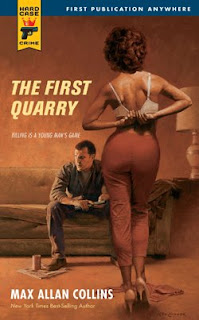 Max Allan Collins is one of those writers capable of turning a plot upside down in just a few short paragraphs and giving his readers an entirely new look at something old and worn. That he now does it with an entire series is simply terrific fun.

Back in 1976, the author of the NATE HELLER books and THE ROAD TO PERDITION, began a new series of crime thrillers about a professional hitman known as Quarry. He followed it up with six other volumes, the final being the aptly titled THE LAST QUARRY, published in 2007 by Hard Case Crime. As I reviewed in this very column, it was a great read and fitting end to this dark, always mesmerizing saga. And of course lots of us were sad that there just wouldn’t be any further Quarry tales to enjoy. Boy, we’re we ever wrong.

After telling us his professional killer’s last assignment, Collins flips the entire stage end over and end and now offers up THE FIRST QUARRY. Yup, it’s the juicy, razor blade to the throat hor douvere after we’ve already devoured the bullet blasting dessert. Collins is one manipulative S.O.B. God bless him.

Coming home from , our hero finds his wife shacking up with a neighbor. When Quarry confronts him, the man laughs in his face. Quarry drops a car on him. He’s spontaneous and resourceful, if nothing else. Released by the police because the D.A. isn’t about to take a recently returned veteran to court, Quarry is approached by a very rich man who calls himself the Broker. He offers Quarry steady employment as a professional assassin, a trade he learned from the U.S. Army and became quite proficient at in the rice fields and jungles on ‘. The pragmatic Quarry accepts and is there christened with the name Quarry. You really didn’t think it was his real name, did you?

Once these required preambles are done with, Collins serves up a truly twisted gem of a thriller for his freshly minted killer. Quarry’s target is an English professor at a small college. The fellow is writing an expose their customer does not want finished. By the time Quarry discovers their employer is actually a mob boss from , he’s already killed three people, made love to two beautiful women and become entangled in gang war. Just your typical day at the office for Quarry. There’s the adage that one should always save the best for last, but with THE FIRST QUARRY, that theory sinks like a body with cement boots. This is one of Collins’ most satisfying thrillers, deftly mixing action, suspense, sex and humor into a cocktail that will knock your socks off!!! Don’t miss it!

Love the Quarry series. Still need Quarry's Cut, along with this new one.

Hi, Glen. What I'd love to do is see HCC reprint all the Quarry books.
I can only imagine what a great packaging job they would do with them.

I have to finid this series. Sounds ubber manly!

Damn straight, Joe, and of course,
this is the one you want to start with.