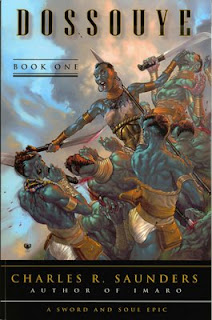 In 1978, writer Charles Saunders submitted a story entitled Abewe’s Sword to the paperback anthology, AMAZONS, edited by Jessica Amanda Salmonson and published by DAW books. With the then popularity of Conan and other sword and sorcery heroes, the conceit of this volume was to focus the spotlight on women warriors. No stranger to this genre, Saunders had by then given the world his greatest character, Imaro, the black hero who inhabited ancient . Delving back into this setting again, he now envisioned a tall, brave and beautiful female soldier named Dossouye.

In the 1980s he added three stories more to this series, Gimmile’s Song, Shiminege’s Mask and Marwe’s . In 2002, he saw the possibility of collecting these adventures and rewrote several while adding a fifth to round out the narrative; Obenga’s Drum. This volume is that collection.

Unlike Imaro, Dossouye grew up as a part of an elite fighting force, ahosi (female warriors) of the . In this kingdom, all the ahosi eschew marriage and family for their service to the Leopard King, the ruler of the land. They wear ankle bracelets that identify them as his brides and only when those rings are broken by the King’s decree are they allowed to marry and go on with their own, personal lives.

As always, Saunders is a master of inventiveness and Dossouye and her battle sisters go into battle riding domesticated water buffaloes. Our heroine’s is a massive bull she calls Gbo. Rider and animal are inseperable and when in combat become an efficient team capable of devastating the enemy’s ranks.

In the opening story, Dossouye is chosen by the spirits of her ancestors to wield a magical sword which will save her people from an invading army. She accomplishes this feat but at great personal sacrifice. At tale’s end she is forced into self-exile, never to return home and she sets out to explore the vast, unknown lands to the East, where a great forest rises up out of the earth. It is in this alien world that the remaining four adventures occur and each is a gem of both action and human drama. Dossouye is a complex character and Saunders deftly explores her inner most thoughts and emotions as she adapts to her new life, alone in a new land filled with all manner of exotic peoples and creatures. This collection is clearly the set up for a proposed, full length novel which I pray is not too far in the writing. I am most eager to take up with this ahosi and her pet war-bull.

Final note, due to the lack good sense on the part of today’s publishing community; Saunders had to resort to self-publishing the terrific book. The only sure place you can get a copy is at (http://www.lulu.com/content/2322980). The book sports an absolutely gorgeous cover by one Mshindo Kuumba. If you truly enjoy sword and sorcery done right, you must get this book. You can thank me, later.