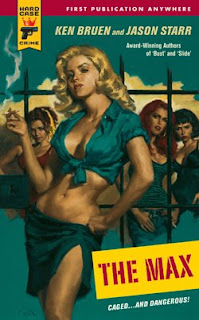 Having read and enjoyed the first two books in this hilarious series, I was really anxious to get my hands on this one. It is the first continuing series Hard Case Crime has ever produced and they’ve set the bar extremely high. In BUST, Bruen and Starr introduced us to the most self-delusional shyster in entrepreneur, Max Fisher and his nymphomaniac secretary-lover, Angela Petrakos. The two, with the help of an Irish psychopath, plotted the murder of Max’s wife. Through a serious of mind-boggling snafus, they not only managed to do the dirty deed, but also escaped the clutches of the law in the process. Well, two of them anyway.

In the second installment, SLIDE, Max ends up becoming petty drug dealer with Al Pacino Scarface fantasies. Meanwhile, Angela, having fled to , returns with yet another killer and this time the body count really mounts quickly. In the end, Max’s luck finally runs out and he’s on his way to prison, while the lovely Angela has barely made it on a plane and for a second time gets away free and clear.

THE MAX begins with Angela having settled on a small Greek island and Max arriving at where he is going to serve his sentence. After SLIDE, I honestly didn’t think these two writers could possible top the sheer insanity of that entry. By the end of chapter one, they had proved me completely wrong and I was laughing my fool head off. Max is perhaps the dumbest gangster ever created and how he manages not only to survive in the pen, but ends up running the Big House is sheer brilliant lunacy. Meanwhile the ever sexy Angela is once again up her neck in foul play and leaving a trail of bodies in her wake. She is caught and sent to a women’s prison on an island called Lesbo. All of which is just too funny to properly describe. Don’t worry, she manages to escape, as always.

The subplots in THE MAX, like the first two books, are many and each is deliciously twisted and evil. There isn’t a decent person in this entire book, yet each of them is so marvelously brought to life, I could care less. Bungling-crook tales are hard to write because most crime writers simply don’t understand the humor inherent in most criminal.

For sheer outright stupidity, the characters in THE MAX take the prize, as you will, if, on the other hand, you are smart enough to pick up this book.

Nice to see The Max is now out. I've been saving Slide so I can read both back-to-back. I'll return after I've read both books.

Actually it isn't, Scott. Sorry.
Read under the heading carefully, I do list that the book is available in August. Sorry. You'll have to wait
wee bit longer. But per my review,
it's really worth the wait.

I certainly plan to get it.

The first two were great, and thisone sounds fantastic.

Glen, you will absolutely love this one. In fact the only bad thing about the book is it has to come to an end.
And this time I think we've reached the true finale. Still, these guys
have proved me wrong before. Ha.

I am half way through this and I must agree, the dialogue and character thought processes are hilarious.