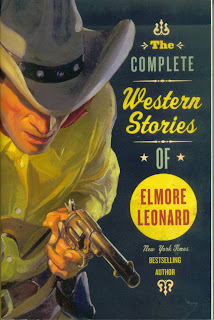 A good magnetic compass will always point to what is called “true North.” After having finished this whopping big book, I found myself thinking the one clear cut theme throughout these thirty-one stories was that they all pointed “true West.” Social historians have for years claimed a big part of this country’s moral fiber was shaped during the post-Civil War years during our expansion west. The era of the “wild west” and the cowboys somehow infused itself onto our cultural consciousness. From the early dime novels to the rampant production of the silent B movies, tales of the old west have imbedded themselves into the identity of what it is to be an American.

Talented writers who have worked in this genre always revolved their stories around that basic cowboy code of simply doing the right thing. From Tom Mix seeking vengeance in Riders of the Purple Sage, to Gary Cooper defending his town in High Noon and Clint Eastwood out to avenge a scarred saloon girl in Unforgiven, the ramrod nobility of the cowboy hero has remained unwavering.

Picking up a book this big can be daunting, but once I started getting into its tales of Apaches, Mexicans and Cavalry officers, I could almost smell the mesquite and feel the heat of the blazing sun that just never quits. Leonard uses that locale as the primary background for all his stories and he does so skillfully, painting a picture of a rough, cruel landscape that clearly helped define the people who dared to live on it.

Leonard was brought up in and during World War II served with the Seabees in the South Pacific. Upon his discharge he entered the and graduated in 1950 with a degree in Philosophy and English. He sold his first short story, Trail of the Apache, in 1951 and for the next two decades continued writing top-notch western tales. At the same time he also penned novels, many of which were later bought by and made into films. Two of the stories in this collection were similarly adapted into movies; the Captives filmed as The Tall T, and 3:10 To Yuma, first filmed in 1950 and then remade this year. Each of these films, including those based on his western novels feature the resolute, stoic hero up against overwhelming odds but refusing to compromise his integrity and honor. They are all classic morality tales that just happened to be played out on horseback.

After the western pulp magazines died off in the mid-sixties, Leonard shifted all his efforts to novels and soon was turning to urban criminal topics like Get Shorty, Rum Punch, and Out of Sight. All of which propelled him into the limelight as a bestselling author. Deservedly so. Still, it is in these western that his true gift shines, as each of these stories captures not only the human condition in all its imperfection, but does so with a sympathetic touch that leaves the reader feeling better for having read them. They are populated by unforgettable characters like the young army officer who’s taste for moonshine saves his patrol; the Mexican constable who confronts racism and is in the end defeated by it and the woman with the blue tattoos on her face exiled into the desert by an ignorant, wounded husband.

This is a truly amazing collection and if you appreciate the true genius of short stories, then do not let it pass you by. Voices like Elmore Leonard’s need to be cherished.

There was one copy at B&N last night and I almost picked it up. The problem is I have too many other things to read but more so I have no more shelf room. It's going to go my my "list".

Anthony, this book really surprised me in just how much I enjoyed it.
I wish Leonard would write more westerns. The man is a master at this.