A DIET OF TREACLE 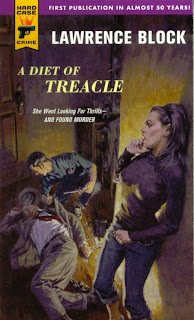 A DIET OF TREACLE
By Block
Hard Case Crime
205 pages

Welcome to , during the height of the “beat” movement. Anita Carbone is a bored college student who, like the rest of her generation, is repulsed by the American dream of surburbia, a nine to five job and two and a half kids. She doesn’t know what it is she wants, only what she doesn’t. Thus she hooks up with two pot-smoking hippies in the persons of Joe Milani and Shank Marsten. Shank supports the two by selling marijuana while Joe simply smokes weed and floats through his life.

When Shank is offered an opportunity to start pushing heroin, he grabs for it and soon is moving in faster, more lucrative circles. He begins to have dreams of big scores with even bigger rewards. All the while Joe and Anita are simply tagging along for the ride, unaware of how deep into the drug world Shank is leading them. In the end Shank’s house of cards falls apart and he resorts to violence to escape capture by the law. Soon all three of them are on the run with nowhere to go.

Block is a craftsman who builds characters precisely. He knows their motivations, or in this particular case, their lack of such, and he paints a sad picture of a lost generation struggling to find some worth in the world. By the books climax, Joe has to climb out of his mental fugue and get back into reality, or else become a piece of social flotsam forever adrift in a meaningless existence. First published in 1961, A DIET OF TREACLE is a look back in time well worth your attention.

while the character building is very good, it takes SO LONG for the story to get moving it doesn't read like the other breakneck pace Hard Case Crime books. It reads like a mid 50's exploitation movie on paper rather than a true crime novel.