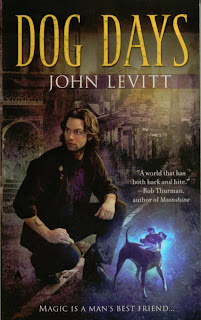 Half way through chapter one of this book, I began get a very familiar feeling as if I was entering a fictional neighborhood I’d been to before. Mason is a jazz guitarist who lives in and makes a comfortable living playing occasional gigs in night spots throughout the city. He is a talented musician but admits he could be much better if he worked at it. The same applies to his ability to do magic.

The word wizard is never used, rather Mason tells us immediately that there are people who can “do” magic and those that cannot. Whoa, now where have we heard that before? Of course it is Harry Potter’s setting, the non-magic folks being the muggles. That is what DOG DAYS reminded me of from start to finish, as if I’d stepped into a mature version of a J.K. Rowlings adventure.

Like Harry, Mason also has a pet ally, a small brown dog named Louie who is much better realized as a character then Harry’s owl ever was. Levitt develops the relationship between Mason and Lou so deftly, it becomes one of the major plot points to what is actually a very fast paced suspense mystery. An unknown practitioner, the word replacing wizard here, has attacked Mason on several occasions and both times nearly killed him. Desperate to understand why his life is suddenly in jeopardy, Mason seeks out the help of Victor, an Enforcer who oversees the magical well-being of the city, and his old mentor, Eli, another powerful practitioner.

As much as Levitt uses magic throughout the story, he never allows it to drift free, keeping his reality-anchor in check throughout. Much like the Rowlings books, because we believe in the mundane, normal every day environment the protagonist lives in is our own, we can then suspend our disbelief and imagine a secret realm co-existing in the shadows, just a little askew from our vision. A place of deadly arcane goblins and crystalline cave dwelling monsters that Mason must escape and defeat before he can hope to unravel the mystery and the villainy behind it.

It is a terrific story, well plotted and written. Mason and Lou are fascinating and I’m thrilled to know DOG DAYS will have sequels. I enjoyed taking this journey through the fog enshrouded, magical streets of the city with the two of them and am very eager to do so again.

Sounds like a cool urban fantasy. I'll have to put this one on my list. If you've read any of Jim Butcher's Dresden Files novels, how would this compare? It sounds a bit more serious in tone

Not yet,Doc, although my writing pal,
Andrew Salmon swears by the Dresden books and keeps bugging me to try one. And yup, you hit it on the nail, i.e. this book does have a darker tone to it, but only in that the hero is being hunted by unknown forces and that would dampen anyone's sense of humor a wee bit. Ha. Mason is really a very likable dude and can crack wise with the best of them. Again if someone is throwing shark-teeth zombies at him. I really am anxious to read more of his and Louie's adventures. They're a unique team.