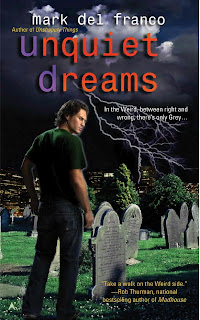 Imagine if you will that the world of fairies and elves and other assorted fantasy folks actually existed somewhere in another dimension along side our own. Now imagine that somehow that world and our own suddenly merged together into one truly weird reality and there you have the setting of Mark Del Franco’s fantasy series. In this world, which looks, sounds and feels like our own, all these fey creatures now reside right alongside normal humans. The day of merging is known by all as the Convergence and the fey people recall it with much melancholy as they were the ones uprooted from their familiar existence and thrust into ours without any warning.

It is many years since the Convergence and fey folk have learned to adapt and live in the human world, albeit with a silent, often antagonistic acceptance. Our hero, Connor Grey, a Druid born on Earth, is part of the new generation that has no memories or emotional connection to the old world. He lives in and works helping the police on matters dealing with the fey community. His best friend is a tough, Irish detective named Murdock and they make an effective team, each deferring to the others strengths whenever on a case.

During an earlier investigation, Grey was nearly killed by a German Elf. When the Convergence occurred, it did not simply deposit all manner of fey beings so they could live harmoniously as one people. Far from it. Old hatreds and rivalries came along, such as the animosity between Celtic Fairies governed by the Guildhouse and the Teutonic Elves ruled over by the German based Consortium. It is one of these latter that attacks Grey, and although the villain fails to kill him, his eldritch assault somehow robs Grey of his druid powers. Now he has to adapt to a life without these skills and rely on his instincts to help Murdoch when something goes awry in ’s fey neighborhood.

When one of the leaders of the Consortium and a human teenage drug runner are both murdered on the same night only blocks away, Grey suspects the killings are somehow related. The Elf lord was a politic figure attempting to bring about unity between the Guildhouse and the Consortium. His brutal slaying by a Troll gang leader begins to stir up bad blood between the two factions until an all out magic war threatens to overrun the streets of Beantown. It is left to has-been Druid and a savvy human cop to unravel the mystery before that war erupts.

UNQUIET DREAMS is the second book in the series and although I’ve not read the first, I can say without reservation it a solid adventure filled with unique characters and plenty of fast paced suspsense. In fact the only thing I did not like about this book was its title. Del Franco has chosen to name the books in this series with words beginning with the UN prefix and although that may be a nifty marketing stratagem, it really does not serve his novel in the slightest. It is a poor label slapped on a really good book. Do not be put off by it.