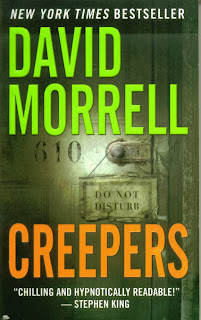 As a child, the street I lived on had an abandoned railroad spur that cut across the border of an old factory yard and came to an end next to deserted concrete block building. Now, as an old thinking back on its shape and design, I’d guess it had once functioned as some kind of transformer power station, controlling the various tracks. But by the time I was ten, it was nothing but an empty structure, its guts long ago ripped out leaving behind a bizarre concrete shell that was a irresistible magnate to every kind within a two block radius.

Situated at the bottom of a hillside depression, the raise railroad platform virtually hid the blockhouse from view to those people in the big factory or on the street passing by. Once I, and my brothers, and pals discovered it, we spent many summer hours in, around and stop that place. Sometimes I would have most of the gang meet me there after dinner, just as twilight was falling and we’d climb ten foot ladder, enter the dusty, junk cluttered interior, with its open portals, the glass having long been smashed and obliterated, and there, with a single flash-light in hand, I would sit and tell them ghost stories. That was almost fifty years ago and to this day, whenever I cross paths with one of the old gang still around, they will invariably mention our adventures in that old, abandoned power station.

I mention all this because I too was once a Creeper; the slang name given to today’s urban explorer. Urban explorers are people from all walks of life who are obsessed with investigating abandoned buildings, structures, tunnels and other architectural landmarks created by our fast moving societies. They imagine themselves time-travelers when exploring these long forgotten edifices. Today there are thousands of Creepers in all parts of the world and their adventures formed the idea behind this David Morrell thriller.

The grand Paragon Hotel, which for many years towered over the boardwalk of , is scheduled to be demolished in two weeks. Having been bordered up over twenty years ago, the hotel, built in the shape of a pyramid, was the home of an eccentric, hermit millionaire. University Professor, Robert Conklin, has assembled a team of three former students and one tag-along reporter, to explore the darkened halls and rooms of this once luxurious resort and see what remains of its former glory. But once they managed to gain access to the building’s convoluted interior, they soon discover that there is a grotesque evil still residing amidst the silent corridors of the Paragon. It is a monstrous evil that does not welcome intruders and within only a few hours of their entry, Conklin and his team are in a frantic, desperate struggle for their very lives.

David Morrell is the finest thriller writer alive today and CREEPERS continues to support that claim. It is a flawless thriller that is so well written, the reader becomes mesmerized within the first few pages and then captured completely. Once you’ve reached the black heart of the Paragon Hotel, you’ll find yourself wanting to escape it as desperately Morrell’s characters and the climax can’t come fast enough. CREEPERS is a delicious experience and having enjoyed it, I doubt I will ever look at another abandoned building in quite the same way ever again.