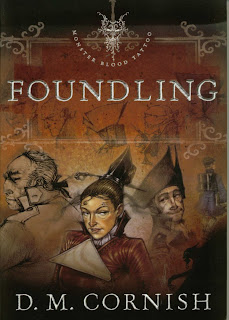 The real success of any fantasy adventure is how complete the writer creates the protagonist’s world. If a background is grounded in details that remain true and logical, then the story can be told with an added richness not often found in literature. Such is the case with D. M. Cornish’s amazing new novel, FOUNDLING.

From the second you enter this world, you know at once that you are venturing somewhere new and perhaps dangerous. Then, with a subtle shift in emphasis, we are introduced to the hero, one Rossamund Bookchild and that unsettled anxiety is immediately dispelled. Why? Because Rossamund is so real and sympathetic. He joins the ranks of many other classical orphan heroes ala Oliver Twist, Pip and even Harry Potter. He is an optimistic lad who, as a babe, was abandoned on the footsteps of Madame Opera’s Estimable Marine Society for Foundling Boys & Girls. In that one title we are informed that Rossamund’s people are a seafaring culture. And what a sea it is, by all the accounts and adventures related to him and by Head Master Fransitart, a retired sailor whose background is misted in mystery.

By the time Rossamund attains a certain age, he is allowed to be apprenticed to any reputable government agency. In other words, when ready to leave the orphanage, he must assume gainful employment. Rossamund learns he’s been chosen to be a Lamplighter for the Empire. It seems a terribly boring choice for a career, but again, he has no say in the matter and is quickly bundled up, given a stipend, letters of recommendation and launched into the real world.

And again, let me reiterate, what a world it is. It resembles the Victorian Age of Charles Dickens’ famous stories with a big dash of Robert Louis Stephenson thrown in to keep things humming. Rossumund is to travel to a distant city by river, only he mistakenly takes the wrong boat which results in his being kidnapped by a group of unsavory pirates. He manages to escape and then finds himself in league with a professional monster fighter. Oh, did I mention this world’s frontiers are populated by all sorts of monsters? And to combat them, certain brave souls acquire special powers and hire themselves out as mercenaries. They acquire these so called talents by undergoing radical surgeries and having foreign organs grafted into their bodies.

Such a monster fighter is the beautiful Lady Europe, with whom Rossamund soon becomes a traveling companion. FOUNDLING is the first in a series and is sub-titled Book One – Monster Blood Tattoo. Once I started reading it, I was completely mesmerized by the spell it wove. There are more new and fresh ideas in this one book then half a dozen others I read over the years. Enough so that Cornish isn’t satisfied to let his readers go even when they’ve reached the end.

I listed this novel at 312 pages. The actually book, with all its beautiful illustrations, also by the author, goes to 434 pages. The remaining 112 pages consist of appendices, maps and a remarkably comprehensive glossary. Note, you don’t have to read any of it to love THE FOUNDLING. Consider it a literary after-dinner-mint to be enjoyed later at your leisure. If you enjoy fantasy at its highest level, then I urge you to not to miss this new book. It truly is one of a kind.