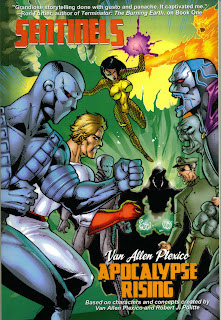 Finally the third and final book in this epic super hero saga. Not that there won’t be more adventures in the future, but this volume does complete the story arc established with book one and continued throughout the second. It’s a slam-bam, in your face slug-fest this time out as Earth’s heroes, new and old, must come together to stop one intergalactic threat after another.

And I am not exaggerating in the least here. The first assault on planet Earth is by a series of quickly replicating robots known as Xorexes that are virtually unstoppable. The more the powerful Ultraa and his young team attack the destructive machines, the stronger they become by absorbing the heroes own powers; which are then transferred to all the Xorexes instantaneously. This contest is remindful of Hercules’ mythological encounter with the multiple headed Hydra monsters.

Yet somehow the Sentinels’ own alien robot ally, Vanadium holds the solution to saving the world from this robot infestation. Then there is the fate of the twin Warlords, each battling the other to invent a machine that will erase the known universe. Never mind the mind-control conspiracies of the mysterious Randall Nation lurking in the shadows of the very Pentagon itself.

Plexico stirs a heady stew of fast paced action that never once lags. In fact I often found myself flipping pages so fast they began to blur. The one and only weakness of this entry is the fact that it does depend heavily on the reader having read the first book two books to enjoy it to the max. The author does provide a two page recap at the start of the book, but it in itself only serves to show just how much has gone on in books one and two; events that are extremely crucial to identifying the characters here, as there are lots of them, good and bad.

So thumbs up to a smashing wrap up to what has been a triumphant glorious homage to comic book super hero teams. Whether you’re a DC or Marvel fan, there is much for you to relish and appreciate in these adventures. Thumbs up, Plexico. This is another solid winner.