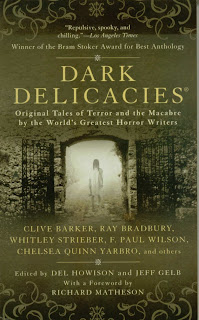 Often times while at conventions chatting with my colleagues, one of the topics that seems to reoccur frequently is the death of short fiction in American literature. Oh, I know, you can all make an argument for this or that foundation or magazine that still promotes the art of short story writing. But if you are brutally honest, you will also concede that these are mere oasis in a vast desert where the format is all but forgotten and extinct.

Except for one particular genre; horror. The field of short horror fiction is as vibrant and alive today as when I first discovered it as a teenager in high school with my introduction to the works of Edgar Allan Poe. Poe is without a doubt the founding root of American short fiction, and that the one genre he so excelled in, that of the horrifying, thrives today says something for our national psyche as a whole. Without going into all the psychological underpinnings of why we like to be frightened, the truth remains that all of us, at one time or another in our lives nurture a dark desire to peek into the black bedroom closet, almost wishing to find a lurking monster within. Today’s horror writers serve that primal need by offering up the monsters our imaginations crave.

That said, the strength and weakness of any anthology is always going to be its diversity. DARK DELICACIES, we are told in the preface, came about because there is an actual bookstore with that name located somewhere in and it caters to horror fiction. Thus did one of the owners and a fellow writer come up with the idea of producing a yearly anthology series showcasing today’s premier writers of the macabre. With this first volume, they hit a bulls-eye in winning the prestigious Bram Stoke Award.

On the whole, DARK DELICACIES does deliver its promise to put forth the scariest tales ever. Some of course miss the mark by very little while others sadly don’t even belong in this collection. But again, with a mixed bag, that is always to be expected. Ray Bradbury’s entry is a token affair. Had his little noir romance been submitted by an unknown, it would most likely have been rejected on the spot.

My favorites are Nancy Holder’s OUT TWELVE-STEPPIN’, SUMMER OF AA, about two rock stars in L.A. who happen to be cannibals and are trying to quit. It’s both chilling and funny as hell. Likewise John Farris’ BLOODY MARY MORNING which delivers a wonderful, twisted finale. The most haunting, and justifiably so, is THE DIVING GIRL by the recently deceased Richard Laymon. Laymon was a truly unique voice in the world of horror fiction and reading this touching story, I was once again reminded of how much he will be missed.

Other notables worthy of your attention are; HAECKEL’S TALE by Clive Barker, THE PYRE AND OTHERS by David J. Schow, BLACK MILL COVE by Lisa Morton and THE BANDIT OF SANITY by Roberta Lannes.

There are a few other so-so pieces. Finally, since I’ve applauded the best in this gathering, it is only fair I skewer the worst. That honor goes to KADDISH by Whitley Streiber. His story is a distasteful anti-religion piece of science fiction extrapolation on what would happen if the Christian Right were to control the country. One of the tenets of true Christianity is that all people are allowed to live their own lives and make their own religious choices. Maybe Streiber has never met a real Christian before. His vision is sophomoric at best, hateful at worst. Too bad it had to be included in this otherwise stellar collection.

Pick up DARK DELICACIES, wait for a lonely, foggy night and sit back and enjoy, But keep one eye on those shadows in the corner. They seem to be moving, don’t they?

I think the guy who wrote Thrilling Adventures or whatever hit the nail on the head with his views of what happened to the genre.

PC infected the genre, and now all we get in short stories are the same tear stained epiphany type stories that I hated as a teen and still hate today.

I wont' argue with that, Glen. Politically Correct had pretty much ruined honest creativity in literature today. Which is why the horror genre remains a breath of fresh (albeit foul..decaying..ha) air. Horror writers have the grapes to tell it like it is.

Kaddish wasn't so bad. I dont think he was bashing the religion so much as the people that interpret it to fit their views and oppinions.

Just for the record, Dark Delicacies is in Burbank, CA.