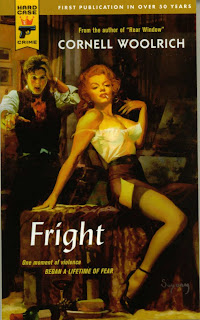 Cornell George Hopley-Woolrich was born in 1903 and died in 1968. During his life he wrote twenty-seven novels, the last, INTO THE NIGHT, was unfinished at his death and completed by Lawrence Block. So successful were his novels and short stories that twenty-five features were made based on them to include Francois Truffaut’s THE BRIDE WORE BLACK and Alfred Hitchcock’s REAR WINDOW.

Cornell’s work was the essence of noir drama, centered around the psychological traumas suffered by his characters. FRIGHT, originally published in 1950, under his George Hopley pseudonym, is a prime example of this kind of gripping thriller.

Set in the early 1900s, a young business man, Prescott Marshall, is about to marry the girl of his dreams; a young socialite named Marjorie Worth. A few weeks before the wedding, goes out on the two with several of his pals and ends up having a dalliance with a girl from the wrong side of the tracks. When the girl comes to him several days later and asks for money to keep her silence about their tryst, he is more angry with himself for having let down his moral guard, then he is with the bimbo. He pays her and thinks that’s the end of it, but alas he soon learns otherwise.

On the morning of his wedding, the blonde shows up and demands an even larger sum. This time she threatens to disrupt the wedding and tell Majorie the entire sordid tale. Pushed to his limit, strangles the girl in a fit of passion and hides the body in his closet. He somehow manages to go through with the wedding, but all the while his mind is caught up in a merry-go-round of fevered terror he cannot escape.

Woolrich’s genius is taking us into ’s fragile mind and watching as every single event in his life from that point onward becomes a threat to him. He convinces Marjorie, after their honeymoon, to flee and go live in the . Yet he’s not safe from his paranoia even there. For as any psychologist would understand, the one person Prescott Marshall cannot ever elude is himself. His spiraling descent into madness and ultimately other murders is an amazing tour-de-force that held me until the very last, astonishing page. Woolrich had a gift for language that is all too rare in modern writers and he employs it throughout this novel with an artist’s deftness.

FRIGHT is one book I will not soon forget. Lastly, a big tip of the fedora to cover artist, Arthur Suydam. This is one of his best efforts to date and a fitting companion to this terrific Woolrich classic.

Nice review, Ron. I'll have to pick this up. Suydam is a great artist, isn't he? he's been turning out some hilarious covers for the Marvel Zombies comic series.

Thanks, Mark. It's really a fantastic read. As for that cover, if you look really close, it's easy to see Suydam used Marilyn Monroe as his model.
Guy is simply amazing.