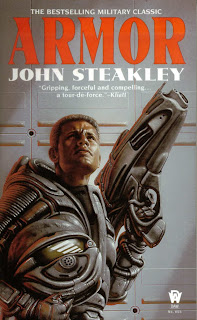 I have an affinity for science fiction military novels. Two years ago a friend of mine urged me to find a book he had read long ago called ARMOR. He ranted and raved about how brutal was its depiction of warfare and how much the book had awed him. Considering it was well over ten years since he’d read it, I was willing to accept his recommendation. For a book to having such a lasting effect suggested it was truly something special. Two weeks ago, while browsing a mall bookstore, I found ARMOR. It is copyright 1984. I have no clue what printing this paperback is, and I don’t really care. I’m just damn happy it is still being reissued.

ARMOR tells the story of a mysterious man named Felix who joints the Fleet Navy to escape a painful past. During basic training, he is found to have unique warrior skills, ala a remarkable adaptability to combat situations and an incredible, almost superhuman will to live. Felix is made a Scout and given the standard, fully armored battle suit, complete with the latest computer controlled technology to provide him with the most up impressive firepower of any soldier in the known universe.

He and his fellow warriors are going to need all of that weaponry. Mankind has gone to war with an alien race so lethal, they engender fear even by the mention of their earthly description, Ants. On a savagely hostile desert world, where the air is poisonous and rivers of acid flow, millions of these huge, four-armed killing machines breed every single day with one hive-like goal, the complete destruction of the human race. This nightmarish planet is called Banshee and that is where Felix and thousands of his comrades are deployed.

From the start Navy intelligence gives proof to its own oxymoronic nature as Felix and his group arrive dead center in midst of a swarming ant pile. Thousands upon thousands of ants, their pincer-like hands clawing and cutting through the plastisteel of Fleet armor and gutting into soft human flesh beneath. But Felix isn’t one of these terrified victims. Somehow the essence of the suit comes alive at the moment of contact and suddenly he finds himself being controlled by a powerful killing-frenzy he later identifies as the Engine. It will not allow him to die. Felix kills everything in his path, breaks through the ant-swarm and escapes…to fight another day. And another day, again, and again, and again.

Who is Felix really? What secrets lie in his past life and how has he become the only soldier able to merge with his battle suit and become the Engine? This book has been rightly hailed as a classic by sci-fi literary critics and I add my voice to theirs. If you have ever wondered at the nature of the beast that resides in all things under nature’s skies, then ARMOR will raise some uncomfortable issues. Just keep telling yourself it’s only a book. I did. And a damn good one at that.

Glad to see your recommendation on this. I had a friend who, like yours, kept raving about this book. I always thought it sounded like a coat-tails version of Starship Trooper. Unlike you, I never took his advice, but maybe I will now.

Doc, thanks for stopping by. Believe me, this buddy of mine was so insistent, I simply had to see what all the fuss was about. And as I reported in my review, was damn glad I did. And I'm not surprised at the book's reissue. It's quickly becoming recognized as a classic sci-fi military title. Copies are available in most books stores still.
Again, thanks for the comment. Always appreciated.