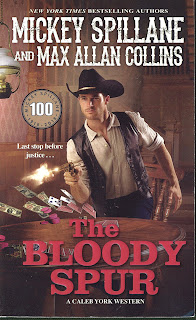 This is the third of Max Collins’ five Caleb York adventures. York was a western character created by the late Mickey Spillane in a movie script possibly intended for his pal John Wayne. Collins adapted that script into “The Legend of Caleb York” and had it published. Happily the editors were taken with the book’s reception and asked him to do more featuring this new cowboy hero. Collins obliged by writing another four books. Obviously we’d have preferred to read them in the order in which they appeared but that not being possible, we were still determined to obtain all five books; read and review them.

Having settled comfortably in Trinidad, New Mexico, Sheriff Caleb York senses trouble brewing when an odd series of events transpire with days of each other. The first being the arrival into town of Alver Hollis, a notorious gunfighter named the Preacherman and his two saddle pals. Familiar with the man’s deadly history, York believes him to be a paid assassin who disguises his killings under the label of “self-defense.” The question plaguing York is exactly who is the Preacherman’s target in Trinidad. The second affair is the public hue and cry in regards to the Sante Fe Railroad proposing to build a spur line from Los Vegas to Trinidad. Whereas most of the towns leading merchants see the spur as an economic boon to the community, blind rancher George Cullen disagrees. This poses a serious hindrance as Cullen’s spread is the largest in the territory on which the railroad needs to cross to build their new spur. Naturally Cullen makes it known he is not about to grant them that right-of-way. It also doesn’t help that the stubborn old man is the father of Willa Cullen, the young woman York is smitten with.

Things begin to heat up and before Willa can convince her father to change his mind, the old man is found dead with evidence indicating he was murdered. What we truly loved about this particular entry in the series is how Collins skillfully shaped it into a western detective story and York proves to be as capable an investigator as he is a peace keeper. The clues are there, as Collins always plays fair, and we happily admit by the book’s finale, he’d smoothly misdirected us. That doesn’t happen often. Thus “The Bloody Spur” is another winner in this series. So, what do you say, Max Collins, got a sixth brewing in that wonderful imagination of yours? We really hope so.