BENEDICT & BRAZOS #2 - A Badge For Brazos 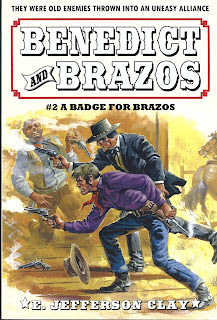 Yank Duke Benedict and Reb Hank Brazos need a stake to continue their hunt for outlaw Bo Rangle who knows the whereabouts of $200,000 dollars stolen at the end of the Civil War. To that end they come to the small town of Harmony run by a loud-mouthed, over-sized Madam named Dutch Amy. She and her partners have discovered that the silver mine in the nearby hills actually has new, richer veins of the ore as yet untapped. Whereas the local mining camp of Whipple Creek believes the mine to have been played.

Fearing the miners will learn of the undug riches, she and her men begin a campaign of terror in hopes of forcing them to abandon the territory. This in turn creates several gun battles between the cowboys and miners that threaten the entire township. Upon seeing Brazos fighting skills, Dutch Amy appoints him Sheriff thinking him a stupid yokel she can easily manipulate. Alas, much to her chagrin, Brazos takes the job seriously and soon, along with Benedict’s assistance, he begins to investigate the recent rash of killings.

All of which leads to a violent gun-blasting confrontation between the two saddle partners versus Dutch Amy’s small army of hired gun. Once again Jefferson Clay demonstrates his flair for writing fast paced, colorful western action that moves across the pages like a runaway stampede of Texas Longhorns. This is Wild West at its Wildest!! Not to be missed.