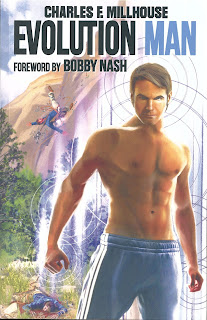 Young Caidin Wells is thrill seeker. Anything from fast cars to skydiving, he willing signs regardless of the risk. Only in his twenties, he thinks himself invulnerable. Then one day his hand slips off a mountain face and Caidin plunges hundreds of feet to the earth. He awakens in a hospital miraculously alive thanks to his mother, Carol Wells, a microbiologist working on human nananites. Nananites are tiny little robots capable of traveling through a person’s blood and repairing any bodily harm done no matter how severe the injury. Although not given the green light by her employer for human testing, Carol realizes the only chance her son has to survive is by injecting him with the nanobots. He does survive and soon discovers his body is a whole lot more than just healthy, it’s on the cusp of being supercharged.

Now if this sounds all familiar, author Millhouse never hides the fact that his hero is in fact his version of the sixties television series “Six Million Dollar Man.” In fact his use of the Christian name Caidin is a respectful tip of the pulp fedora to writer Martin Caidin, the writer who created Steve Austin, the test pilot virtually rebuilt by science.

Millhouse’s use of nanonites is not at all that far-fetched as modern science and medicine are actually testing these microscopic agents today in research labs around the country. Once having accepted this familiar tale, we’re left with two primary plot objectives. The first is how will our young hero adapt to his brand new body? That’s a foray into the character’s personality, his strengths and his vulnerabilities and is extremely well handled throughout. The dynamics between Caidin and his mother, plus other supporting figures is believable on so many levels.

Whereas this is a pulp adventure, we have a second plot; that of the billionaire villain, Armand Devereux, Carol’s employer. He wants to control her discoveries and ultimately build a private army of nano-charged super mercenaries. Devereux, like all good villains, yearns not for cash, but for power. All the power in the world.

In the end, we thoroughly enjoyed this novel and recommend it highly. Millhouse is a more than capable writer and his actions sequences precisely laid out. But there remains an unsatisfying finale. Sure we knew going in this would be the first of a series, but of the two objectives we mentioned earlier, the only one comprehensively dealt with in this opening chapter was that of Caidin’s adjustment; which will obviously continue in subsequent volumes. Whereas the second is left way too much unresolved. Really?