DIAMONDBACK - It Seemed Like A Good Idea At The Time 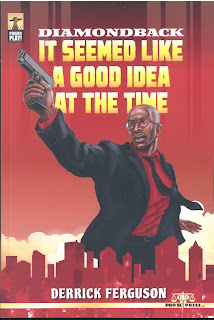 It Seemed Like a Good Idea At The Time

There is absolutely nothing subtle about this book. It is a powerful, gang-blasting, take-no-prisoners crime thriller from start to finish. The setting is the fictional city of Denbrook, a modern day Sodom and Gomorrah filled to top of its highest skyscrapers with sin and depravity run by gang bosses that would have made ancient samurai warlords look like Boy Scouts. Into this hellhole of concrete and steel comes a notorious gangster named Diamondback Vogel who comes across like a mythological John Henry badass.

Of course the various bosses are immediately aware of his presence and all of them curious as to his agenda. There questions are quickly answered when, after only a few hours of his arrival, Diamondback is involved in a bloody shoot-out in one of the swankiest night clubs in the city. Later that same day he takes a meeting with as yet a second crime boss, this one known as the Magician because of his interest in arcane mysticism. A caravan of four 18 wheelers filled with illegal weapons is on its way to Denbrook. The Magician wants Diamondback to destroy three of the trucks and their cargo and bring him the fourth. Diamondback accepts the assignment well aware every other criminal organization in Denbrook will be at the designated locale with similar intentions.

Hours later, at one of the many abandoned warehouses in the area known as the Barrens, Diamondback single-handedly wages combat with all these other factions and by the time he escapes with the only remaining truck, several acres of real estate have been blown to smithereens. The political powers that be, local and federal police agencies are enraged and quickly began their own machinations to find and eliminate Diamondback use whatever means possible. Thus within a twenty-hour period he becomes the most wanted man in Denbrook.

To say we liked this book would be an understatement. One should note, Ferguson is a movie buff and the subtitle to this first Diamondback tale is taken from the classic western film, The Magnificent Seven. Whereas it was a particular Clint Eastwood oater that kept surfacing in our thoughts as we read the book. That one about the Nameless gunfighter who rides into the sleepy border town and soon begins playing one outlaw gang against the other for his own gains. Finally, a needed word of caution here. Like the abundance of graphic violence throughout this book, there are also a few scenes of adult sex that leave very little to the imagination…or rather implicitly fire the imagination. If readers find that objectionable, don’t say we didn’t warn you. Remember the first line of this review. Nuff said.