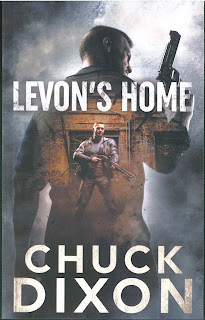 We’ve been wanting to read a Chuck Dixon Levon Cade book from some time now. As always, time seemed to get away from us. According to Amazon, there are seven of these with this one being the latest. Before anything else, let us state the book was a gift from the writer, who is a friend. But that has never stopped us from posting an honest review.

From what is only hinted at in “Levon’s Home,” our protagonist is a military veteran of recent Middle Eastern conflicts and known in his Alabama hometown as some kind of war hero. There are also brief mentions of post-service duty with secret government agencies. Again, we really need to pick up those first six books. Whereas this one is fairly easily laid out. Cade is a widower living with his Uncle Fern and daughters Merry and Hope in the country. When an ex-con cousin named Teddy comes to see him, it is with an unusual plea. Teddy’s ten years old son Jason, who lived with his ex-wife, has disappeared and Teddy wants Levon to help find him.

At Uncle Fern’s urging, Levon reluctantly agrees and begins his own investigation by questioning the mother and confiscating the boy’s laptop. At the same time the local sheriff is dealing with other cases of missing boys and it soon becomes obvious that Jason’s disappearance isn’t an isolated event. Someone with deep pockets is kidnapping these boys and holding them as sex slaves for powerful men with perverted souls.

By the time Levon begins to put the pieces together, he’s ready to mete out his own brand of “southern” justice and the bodies start to pile up. Dixon isn’t one to shy away from the horrors that infest the human spirit and the required merciless retribution required to combat it. Something Levon Cade has no trouble dispensing. “Levon’s Home” is an old fashion pot-boiler that our fingers turning pages as fast as a casino blackjack dealer flipping cards. Action junkies, this is the good stuff. Don’t miss it.