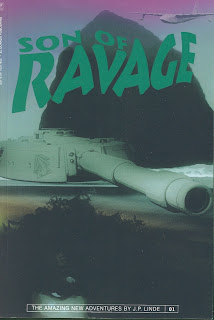 What happens when a comedian takes it upon himself to write a pulp adventure? What you get, if you’re lucky, is a wacky, fast-paced and totally outrageous tale called “Son of Ravage.” Now attempting to satirize something that is already satirical could give one headaches. Pulps were never meant to be taken seriously and by their very nature they were exaggerated stories filled with larger than life characters. Whereas Linde opts to up the ante and make his own characters ever more audacious.

Can you image Doc Savage having a son? One who is unaware of his heritage, is brought up by adoptive parents and at the age of thirty is a shiftless slacker with absolutely no ambition at all. That’s Barry Levitt and unbeknown to poor Barry, his real father was none other than the 40s world trotting adventurer, Rock Ravage. Whereas by some quirk of cosmic destiny, Barry, like his famous sire, has accumulated four colorful pals who are extremely loyal to him. They include Doc, portly chemist, Brain, an intellectual genius, Face, a self-centered thespian and Beast, a rough and tumble redneck with an addiction to action. Thus, when a mercenary named Tanktop (he wears a mini-tank turret on his head that actually has a firing canon) attempts to kill Barry, his friends come to his aid and thus begins their quest to learn who is real father was and why people are tying their best to end his life.

Sound wild and madcap? It is. Honestly, from killer robots guarding an underground marijuana field to space aliens hiding in the ocean, a family of Bigfoots on the loose in the Northwest and a mechanical dinosaur on a lost tropical island. These are just some of the dangers the five will encounter as they race to find the actual mastermind; the villain who actually murdered Barry’s dad.

“Son of Ravage” is hilarious and a really fun read. Enough so that we’ll forgive Linde for constantly misspelling HANGAR; you know, those big structures on airfields that house aircraft. Hangers with an E are for hanging up clothes. And will hardly mention that pathetic excuse for a pulp cover. Really? A book filled with so many wonderful, zany characters and this was the best you could put together to sell it? Shame, shame.

That all being said, we loved this book. All too often pulp scribes forget the element of humor and offer up intense stories with so much angst, one wonders what actual enjoyment can be had from these offerings. Whereas “Son of Ravage” is pure entertainment from start to finish. And we’ll swear to that on a stack of classic pulps any day of the year.