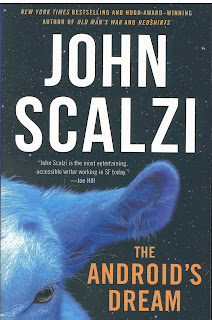 And that all happens within the first half of the book. Soon Harry and the lady, one Robin Baker, are on the run being chased by both human and alien killers. The action is non-stop; the characters brilliantly conceived and climax a slam-bang finale that had us cheering aloud. All science-fiction should be as good as “The Android’s Dream.” We can’t wait to see what Scalzi cooks up next.
Posted by Ron Fortier at 12:34 PM