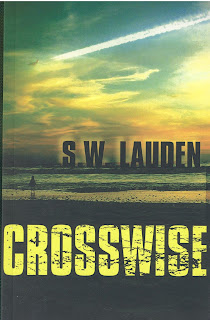 S.W. Lauden’s writing is lean delivering only what the story requires to keep it moving along. There are no long passages of exposition or insightful reflection. His characters, especially Tommy Ruzzo, are all flawed and doing simply doing their best to get from day to day. When murder enters the stage, masks come off and a killer takes the spotlight.
Posted by Ron Fortier at 10:38 AM

Dr.Ekpen Your spell worked and brought my husband back to me. You gave me support when I was feeling hopeless. I feel truly blessed to have found your email address. I sincerely hope others will take that leap of faith and let you help them as you have helped me.for those of you who want to contact him reach him on his email address: (ekpentemple@gmail. com) you will never regret contacting him… He is capable of restoring your relationship and marriage problems like he did for me.

Hi everyone I'm Mrs Katrina Bennett, My husband divorced me 2 years ago to live with another woman and i have tried have him back but i could not, so i try to do many things to get him back and he refuse to come back. One faithful Friday morning, I visit a forum for tips on how to get your Ex back and there i saw a lady testifying on how Dr.alusi helped her to get her husband back after he was tie down with a spell by another woman. Although I never believed in spiritual work I reluctantly tried him because I was desperate and i contact him and explain my problems to him, to my greatest surprise Dr.alusi helped me to bring back my husband after 5days and now my relationship is more perfect just as he promised. Getting your ex back permanently does not only bring back someone you love but it will also reunite your lovers feelings. My husband now treats me like a Queen and always says he loves me all the time. If you are passing through difficulties in your relationship, Doctor alusi can help solve marital problems, restore broken relationships and some other things.I can assure he's highly potent and reliable. Email him for urgent help [dr.alusistanley@gmail.com] or +2348146050373.