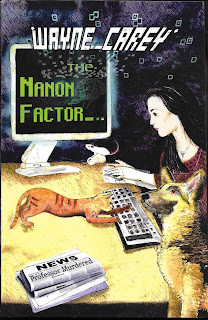 THE NANON FACTOR
By Wayne Carey
A Leo Book
341 pgs

So this fellow named Carey sends us a copy of his first book, “The Nanon Factor,” to read and review. Upon starting the novel, we realize it features animals that have had their intelligence heightened by injections nano-molecules. A dog named Sam and a cat named Sophia are communicating telepathically and this reviewer is about to put the novel down and run for the hills. We’ve never been “animal” people. Not that we have anything against the furry four legged creatures, but hey, not all of us had pets growing up. It’s a personal thing, thus we generally do not enjoy stories with animal characters.

So the instinctive reaction after reading those first few pages was to simply put the book away and tell Mr. Carey we simply couldn’t finish it. Right. Then the dog and cat discover that their owner, the scientist responsible for their alteration, has been murdered and the body is discovered by Katie Tyler, a sixteen year old who lives across the street with her older brother Josh, and detective father, Sgt. Michael Tyler.  Hmm, suddenly we’re got a little Nancy Drew going on here and Katie and her family prove to be really likeable characters, extremely well written. Naturally Mike Tyler wants to lead the investigation of the murder, but is put off by his captain because of his personal connection as a neighbor to the dead man.  Meanwhile, Katie has already brought Sam and Sophie to their home along with a third animal, a rat. And yes, he too has been nano-injected and can mentally talk with the dog and cat. Together, the trio plans to help their new human allies and solve the mystery of who killed their master.

And this reviewer realizes he’s now devoured almost half the book non-stop.  What the hell just happened? What happened was a truly gifted story teller, i.e. Wayne Carey, has spun a tale that is fast moving, suspenseful and filled with such intriguing characters, both human and non-human. He weaves a story so flawlessly told that we found ourselves constantly compelled to turn the next page; to finish as yet just more chapter until all too soon we’ve reached the end. In the process, we’ve become fans of Wayne Carey and his exciting gift of word weaving.

“The Nanon Factor” is a truly wonderful first novel that hints at the tremendous potential within this new writer and we can only wait to see what new thrills he’s going to send our way in the future.  Do keep writing, Wayne Carey, you’ve made a believer out of us.

An interesting book by the sound of it.

I've read two similar stories with animals as main characters that were actually fascinating. Unfortunately, I don't recall the titles or authors, but one involved animals as pirates. The other involved apes as police in a society of mixed apes and humans. Again, both books were really intriguing, which surprised me. Nice review, Ron. Thanks for sharing.

Hi Tom,one of the best in this kind of category of "smart" animals is horror writer Dean Koontz' THE WATCHERS. I ready it years ago and still recommend it to people. The intelligent dog in the story is wonderfully realized. Again, thanks for stopping by.