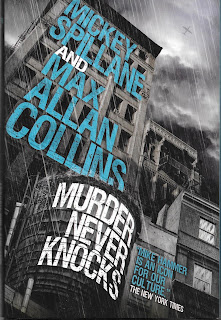 All Mike Hammer mysteries contain a fair amount of action, gun battles and bloodshed but at the moment we’re having a really hard time thinking of another one that comes this saturated with violence. From the first page, wherein Hammer is confronted in his own offices by a hired killer, this story roars out of the chute like a crazed bull at a western rodeo; stomping down anyone unlucky enough to be caught in its path of destruction.

Someone has put out a contract on Hammer and with each new chapter bodies drop; some belonging to ruthless assassins, others innocent bystanders trapped in the deadly crossfire. The puzzle has the savvy private eye doing his best to decipher who put the target on his back at the same as he’s dodging bullets. By the time three different hitmen have tried to collect and failed, Hammer has to face the truth that he is being stalked by a cunning, merciless psychopath unlike any killer he has ever encountered before. How does he fight a madman whose very reasons for wanting him dead make absolutely no sense at all?

“Murder Never Knocks,” is taut, unrelenting thriller and never lets up on its own inherent suspense. It’s a pure Spillane and Collins cocktail, one that goes down smooth and then leaves your guts on fire.
Posted by Ron Fortier at 7:42 PM

There's more violence in One Lonely Night, I think, I mean, Hammer doesn't use a Tommy gun to saw somebody's arm off, but this one is quite good.