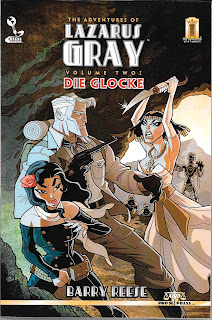 This is the second collection of stories featuring the reborn hero, Lazarus Gray. A one time member of the all powerful secret cabal known as the Illuminati, Gray arrived in Sovereign City washing up on the morning tide with no memory of his past. Volume One told of his struggles to uncover that mystery at the same time introduced us to the amazing trio that would become his partners in Assistance Unlimited; lethal lovely Samantha Grace, former con-artist Morgan Watts and Korean martial artist Eun Jiwon.

In this rip-roaring second outing, Gray and company find themselves traveling the globe to stop would be villains from obtaining all manners of occult power.  From the barren wastelands of Mongolia to the green fields of England and the hidden jungles of South America. No place is too remote for this daring quartet. Along the way they encounter old foes from Walther Lunt, the twisted German scientist, to the ancient Princess Femi. Then they are pitted against new creatures of evil such as the monstrous Jack-in-Irons, a towering behemoth with a boars head and unleashed on earth via a powerful arcane construct known as the Bell; i.e. Die Glocke from the title. There’s also the murderous Titan, a man of superhuman strength.

Our love of this series comes from Reese’s own unabashed fun in whipping up the most far fetched, outlandish plots, creating charismatic heroes and villains and then delivering rock solid action sequences that have us jumping up and down with joy. Reese gets pulp, he breathes it into every single page he writes.  Consider his seductive femme fatales such the previously mentioned Egyptian Mummy Princes Femi and then there’s the so seductive Japanese Miya Shimada, who’s only weakness is her love for Gray. Which in turns leads to one of the most unique plot endings ever envisioned in a pulp tale.

As if that wasn’t enough, this adventure packed book introduces us to two new members of the team; German officer Jakob Spottenbreg and beautiful witch Abigail Cross. Then, in the very last tale, Gray and his allies meet the Golden Age comic hero the Black Terror in one of the strangest crossovers ever imagined.

Honestly, there aren’t enough adjectives in the dictionary to properly applaud this book. Note, it was first published in 2012 and we’re playing catch up here. There are several more volumes awaiting us and for that this reviewer is do damn happy.
Posted by Ron Fortier at 7:49 AM