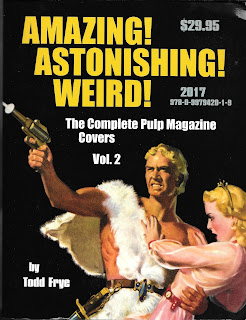 Having come to pulp fandom via the comic book route, we’ve always had a strong appreciation for the art of the pulps. From their being filled with beautifully rendered pen and ink illustrations to their dazzling, colorful covers. One of the real tragedies we learned long ago was how undervalued these covers were at the time they were created. It was not unusual for paintings to be trashed seconds after an issue had been published. Thus over the years the actual number of original pulp cover paintings that survived is such a small percentage of the thousands created, it is one of the saddest realities of our cultural history.

So it is whenever some enterprising pulp enthusiast puts together a book that focuses on that lost art, we stand up and cheer. Over the years, there have been several such titles reprinting what little remaining pulp covers that still exist. We have most of them in our own personal library. Whereas this new collection, independently published book from Todd Frye of Tennessee is something really special.

What Frye has done is to pick a specific pulp title and then reprint, in full color, all its covers in chronological order in which they were printed. In this second volume of the series, he does this with two of the most renowned pulps ever published, Amazing Stories (284 issues and 1 annual dated from April 1926 to March 1953) and Weird Tales (279 issues) dated from March 1923 to Sept 1954. And if that wasn’t enough, the book has all the covers from Astonishing Stories, Marvel titles and South Sea Stories.

The second we opened the book and began looking at those old covers, it was as if we were being transported back in time to a truly remarkable era and witnessing a new literary renaissance intended not for academia, but for the average man and woman who simply enjoyed a good tale. With Amazing Stories, we get the birth of science fiction and its history through the years. The names plastered on those garish covers start off with such venerables as H.G. Wells and Jules Verne and gradually begin featuring the new kids on the block ala Asimov, Campbell, Heinlein, etc.etc; way too many to list here. Likewise with Weird Tales, we witness the emergence of glorious fantasy fiction in all its interpretations from horror ala H.P. Lovecraft to sword and sorcery from Robert E. Howard and so much more along the way. Names like Robert Bloch and Ray Bradbury pop up constantly and it easy to imagine the excitement each new issue generated among the pulp readers of the day.

That this book is a treasure is evident from the first page to the last. The time and effort put into assembling these covers must have been herculean and the result is a tome the true pulp addict will pick up time and time again. Those outlandish, imaginative covers have so much yet to tell us. Frye knows his pulp history and the book’s preface and individual chapter headings are wonderfully written for those new readers unfamiliar with the pulps. It is clear he’s being careful to introduce them properly which leads to our only real critique of the entire book. In one early section, he offers up suggestions on where new pulp fans might find pulps to buy. There he lists the various on-line services ala E-Bay etc. and even mentions comic book conventions but totally fails to mention the two most successful and on-going Pulp conventions still active; the Windy City Pulp & Paper Con happening in Chicago every Spring and Pulp Fest which arrives in late Aug. in Pittsburgh.  Both have been around for many years and feature the largest collection of pulps ever assembled under any roof. Each show is a veritable gold mine for collectors and fans of pulps. In fact, this book would sell extremely well at both. Hopefully in future editions, Frye will amend this oversight.

That being said, this is truly an independent project and at $29.95 a copy a steal. Frye even picks up mailing cost for orders in the U.S. It’s been a while since we’ve seen a bargain like this. Please, if you are true pulp fan, you need to visit Todd Frye’s website listed at the start of this column and pick up a copy of this book. It will blow you away!!