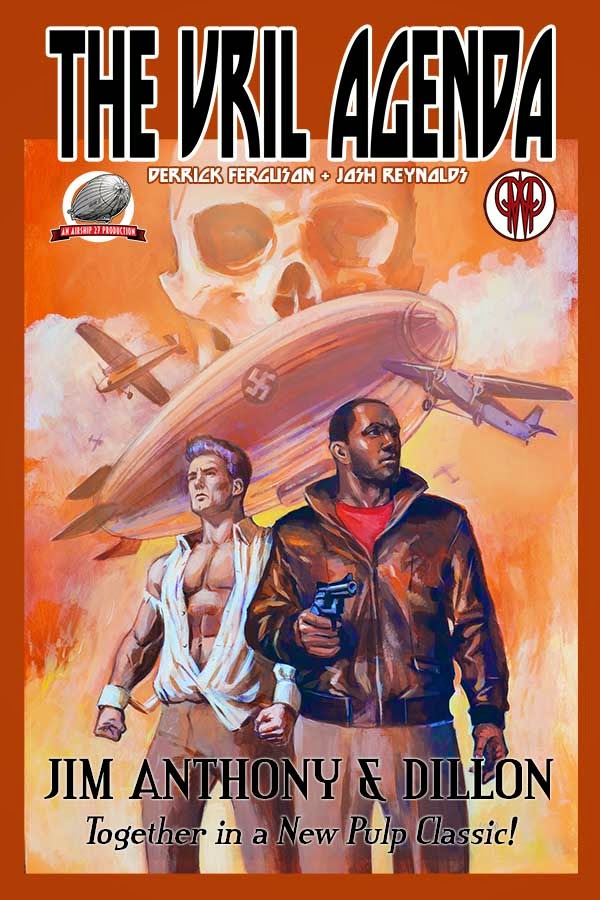 Derrick Ferguson's character Dillon is an absolute favorite of mine. Taking inspiration from both old pulp characters, and from more modern action heroes that at one time ruled the cinema, Derrick has come up with a highly unique hero. It also helps that the man can write his butt off. He knows when to fill in the blanks, when to tease you with a cool concept, and when to remain silent on a particular subject. In essence, he knows how to build a detailed world for his characters to exist in... and his highly enjoyable and visual writing style always brings you back for more. Dillon is a character who always has the knowledge and skills to carry him through, no matter what mission he happens to be on. But where did he gain this type of training? There has been a number of mysteries surrounding Dillon, especially regarding his younger years, which I've been hoping Derrick would eventually get around to filling in... and then one day I happened to check Amazon, and found out that The Vril Agenda had been released! Co-authored with Joshua Reynolds, this release tells a tale of Dillon's early days, and of one of his mentors. It's my first experience with the character of Jim Anthony: Super Detective, and I have to say that Joshua writes the character in an extremely effective and entertaining manner. An older pulp character that shares some similarities with Doc Savage, Jim Anthony is revamped in fine form by Joshua. A master of all things martial, an inventor, and a renowned murderist, Jim is living in semi-retirement now, despite keeping his hand in the game. Just the type of man a younger Dillon would want to be trained by... and that's exactly what takes place in this 238 page adventure, published by Airship 27 Productions/Pulp Work Press.

It's been two years since Dillon left the fabled land of Shamballah, and returned to our reality. He has traveled across the world, and finally arrived at his destination. Which is the New York chapter of the Baltimore Gun Club, where he hopes to encounter Jim Anthony, and convince the Super Detective to train him. Dillon's family has enemies, enemies that slaughtered his mother and father... and Dillon wants to pay them back in kind. His seven years of training under The Warmasters of Liguria has partially prepared him, but he knows that he needs to learn much more, in order to survive his quest. Dillon lays out his story to Jim Anthony, who (much to Dillon's disappointment) does not immediately agree to train him, but does agree to think on the matter, as he gets to know the young man better. Unfortunately Jim also has a number of enemies that are still active, and after a number of violent assaults on the two men, they are left wondering who exactly is trying to kill them. The adventure that follows will be an examination of both men's past, will drive them apart and pull them back together, and in the end they will stand united, facing an evil that plans to reshape the very fabric of reality...

In my opinion, The Vril Agenda is a perfect example of New Pulp done right. In fact, it's just a really great story, regardless of genre. An excellent team up between a modern hero, and a hero from the past, that takes place across the years. The writing from both authors is absolutely top-notch, the characters compelling, the story action-packed. The story flows along seamlessly, and once I started reading, I didn't want to put it down. The time and thought that go into fleshing out both men's history is greatly appreciated. Derrick and Joshua give you enough to satisfy, but hold back enough to preserve the aura of mystery surrounding the two characters. Dillon and Jim Anthony are consummate heroes; willing to sacrifice everything for the greater good, even themselves. The villains aren't one dimensional in any way, they are given their own motivations, which (in their own mind) justifies their actions. They think of themselves as heroes, who are working towards a better reality that will benefit humanity. This makes the villains themselves much more interesting. The settings are imaginative, and well rendered. Basically, this is an outstanding release. I'm not sure what more I can say, other than go out and grab a copy, and get reading! You won't be disappointed.