THE MAN FROM MARS 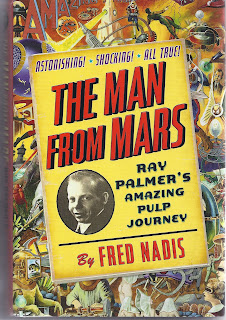 The first time I ever heard about someone named Ray Palmer, it was in the pages of DC comics Silver Age title, “The Atom,” written by former pulp writer Gardner Fox with art by Gil Kane and edited by Julius Schwartz.  What I, and many of my kid colleagues didn’t know was that Schwartz had named the miniscule hero after the legendary science fiction pulp editor, Raymond Arthur Palmer (August 1, 1910 to August 15, 1977), one of the most colorful and controversial characters ever to put pen to paper.

And now we have “The Man From Mars,” by Fred Nadis, a truly remarkable, in-depth look at a unique, one-of-kind personality who both helped in the development of science fiction as a legitimate literary genre and was later accused by fanatical fans for having betrayed it by publishing works of sheer fantasy professing outlandish claims.

Crippled by an accident at the age of seven which broke his back, Palmer suffered a botched operation that stunted his growth and left him with a hunchback; he would never grow beyond four feet tall.  And yet there was an inimitable will inside him that burned like a spiritual nova propelling him to explore the world’s mysteries.  Credited with starting the first ever fanzine, The Comet, in 1930, Palmer would become a driving force in the sci-fi community until being hired to be the editor of Amazing Stories in 1938.

Nadis’s narrative is a rollicking, topsy-turvy ride through the ups and downs of one of the most fascinating personages in the cultural history of America.  Whether praised or vilified, it was clear Ray Palmer, nicknamed Rap, was an original and this volume is an honest look into both his life and the origins of “geekdom.”  If you are a fan of the pulps, comic books, science fiction, or occult mysticism, you will find something in this tale to make you sit up and take notice.

I am always leery of biographies, as too many do their subject matter a cruel disservice.  The last thing a book about a showman like Ray Palmer should ever be is dull and boring.  To Fred Nadis’ credit, “The Man From Mars” is truly anything but a fascinating and fun read from beginning to end.  Pick up a copy and get to know a truly amazing man.  You will be glad you did.
Posted by Ron Fortier at 12:01 PM