THE ADVENTURES OF GRAVEDIGGER 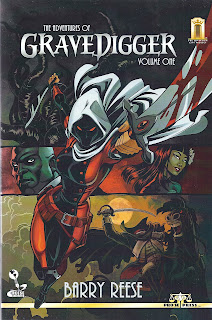 The fun of any Barry Reese pulp fiction is that very element; the fun.  It is an inherent element in every thing he writers and this, the premier volume, of his latest new character series is no exception.

Charity Grace grew up on the way-way wrong side of the tracks in Sovereign City.  The end result of this hard-knock life was her becoming a petty thief and ultimately led to her violent murder.  But cosmic forces manifested by a mysterious Voice are not prepared to allow her eternal slumber just yet.  Instead, floating in a weird limbo state between life and non-existence, Charity is offered a proposition.  She will be allowed to return to the land of the living for a period of three years.  In that time she must become an agent of righteous vengeance and eliminate, permanently, all who prey on the innocent in Sovereign City.  In other words she will become a vigilante executioner.  Considering her only other option is most likely eternal damnation, Charity wisely accepts the Voice’s offer.

Once back, her body renewed with new found vigor and abilities, she soon learns that she is only one in a long line of such special avengers known by the name, Gravedigger, though she has the dubious distinction of being the first female to assume the role.  With the all too brief mentoring of the former Gravedigger and his big, black British assistance, Charity begins to adapt to her new role.  Of course this being pulp fiction, she soon finds herself coming up against an assortment of supernatural menaces to including the gruesome Headless Horseman of American folklore; only he now proves to be a real entity and nearly impossible to kill.

We could go on and on about the cool elements Reese throws into this heady pulp stew chief of which are the cameo guest appearances by two of his other popular heroes, the Rook and Lazarus Gray and their very different reactions to the Gravedigger’s arrival on the crime-fighting scene.  And then there’s the historical back story that adds even more mysterious layers to the plot and is a clever hook for future volumes.

“The Adventures of the Gravedigger,” is another winner from one of the most entertaining writers in New Pulp today.  And friends, that’s saying a whole lot.
Posted by Ron Fortier at 10:18 AM