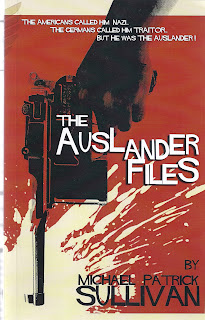 World War II has been raging for months when the white haired man awakens in a hotel room with no memory of who he is or what he is doing in America.  All he knows is that he speaks and thinks in German, vocally with an Austrian accent. So why is he in America?  And why does he have dreams that lead him to various cities where Nazis agents are about to launch acts of sabotage against US bases and interests?  Could it be that he planned those mission?  That he is the Nazis Master Spy and if he does get his memories back, will they prove him to be a heartless monster?

And therein lies the premise of the Auslander; a word that translates in German to mean alien.  With this enigmatic character, writer Michael Patrick Sullivan has created a truly original hero but with all the trappings of traditional pulp action.  This little booklet contains ten very short tales, each approximately 3,000 words in length that are quickly put forth, filled with frenetic pacing that never lets up.  Obviously being so short, there is no room for wasted exposition which is what makes each a gem of pulp fiction.

Sullivan also writes with a modern sensibility devoid of the melodramatic romances of the early pulps.  The Auslander kills, both the guilty and the innocent, to accomplish his missions and foil the saboteurs.  It’s a morally ambiguous line he is willing to cross time and time again.

Kudos to publisher Bill Cunningham and Pulp 2.0 for collecting these stories in a terrific paperback you don’t want to miss.  This reviewer is hoping we haven’t seen the last of the Auslander.
Posted by Ron Fortier at 7:38 AM