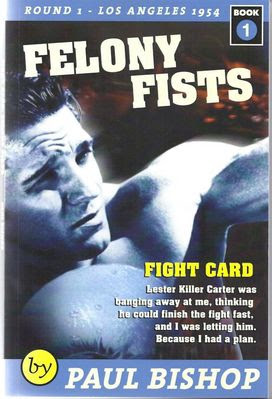 FIGHT CARD : FELONY FISTS
By Paul Bishop
(http://www.bishsbeat.blogspot.com/)
128 pages
Punch. Block. Counterpunch. Duck. Uppercut. Jab. Haymaker. Clinch. The staccato machine-gun lingo of boxing that taps across the brain like a dance choreographed by battling gladiators.  It is a ballet of flying fists, controlled mayhem performed by all manner of combatants with something to win, prove or defend.  Of the entire classic pulp sports genre, the boxing magazines were by far the most popular and prolific. Now a group of today’s finest new pulp scribes have come together to recreate the blood, seat and tears of those canvas arenas in a series of short novellas under the guiding hand of accomplished novelist, Paul Bishop.
Bishop has an extensive resume from his long career as a police officer then detective for the Los Angeles police department, television and movie scribe and finally mystery/crime novelist.  Recently he’s gotten into the new pulp movement and it’s clear by this tale just how much he loves the old school boxing tales.  This story has the atmosphere and feel of an old Warner Brothers black and white flick from the 40s & 50s and one can easily envision actors like Spencer Tracy and John Garfield in the roles of his characters.  It is that evocative of the time and setting; L.A. in 1954.
Patrick “Felony” Flynn is a young cop on the force who is also an amateur boxer, having been taught by a tough-minded Catholic priest in the Chicago orphanage he and his brother were raised in.  Coming out of WWII and the Navy, where he continued his pugilistic ways, he swaps one blue uniform for another in getting back to civilian life.  His goal is to eventually become a detective and member of the famous anti-mob unit led by Chief Parker and called “The Hat Squat.”
Through a series of fateful events stemming from his boxing prowess, Flynn is recruited by Chief Parker to help stymie mobster Mickey Cohen’s plans to infiltrate the boxing world via his heavy-weight fighter, Solomon King.  If King can whip Archie Moore, the reigning champion, then Cohen will have established a foothold in the city as well as the sports community.  Something Parker obsessively vows to stop at any cost; including making Flynn a detective in his elite team providing he becomes a professional boxer and takes defeats King.  No small tasks any way you slice it up.
What follows is a thoroughly enjoyable, fast paced, knowledgeable yarn that was a pure joy to read start to finish.  Bishop never misses a beat; again, knowing his melody by heart and relishing every single sentence, paragraph and chapter like a superbly orchestrated fight strategy.  “Fight Card: Felony Fists” is a sensational opening to what this reviewer expects is going to be a truly amazing series that will revitalize a classic pulp genre in a bold new way readers are going to love.  Me, I in his corner all the way.
Posted by Ron Fortier at 12:07 PM