THE ADVENTURES OF LAZARUS GRAY 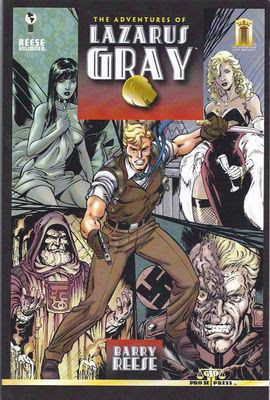 THE ADVENTURES OF LAZARUS GRAY
By Barry Reese
Pro Se Productions
230 Pages
As much as most writers enjoy creating new series characters, eventually many of them, after writing the adventures of the same cast multiple times, start to feel the burden of familiarity.  Add to the fact that each new volume often builds upon the fictional cast from allies to recurring villains so that eventually the poor writer is saddled with a huge ensemble that he or she feels compelled to include in each new story.  These moments of repetitive angst seemed to be evident in Reese’s last volume of his Rook series.  For the uninitiated, the Rook is a masked vigilante created by Reese years ago as his entry into the new pulp community and was an instant success among fans; this reviewer included.
Still, by the sixth volume of that character’s exploits, the sheen of newness had faded and the Rook stories started becoming more about the supporting cast rather than the central hero.  Like Arthur Conan Doyle’s ultimate dissatisfaction with his own creation, Sherlock Holmes, Reese somehow to be struggling to keep the Rook afloat.  It was clearly time for him to move on to something new and with this collection, he has done just that in a most triumphant way.
Lazarus Gray is Reese’s new hero and is an homage to the classic Avenger series, wherein we have our mysterious leading man aided and abetted by a team of loyal assitants; in this case a trio.  Together they are known as Assistance Unlimited.  Although Gray’s creation was part of a shared world that included two other heroes, Reese clearly found his old muse with these new characters and has produced some of his best, most energetic and enjoyable fiction to date.  These stories move at a breakneck speed and are filled with memorable characters and well delivered action to match anything done in the days of the old pulps.
At the beginning of the volume, we meet  an amnesiac washed ashore on the beach of Sovereign City with a strange medallion around his name on which is embossed the words Lazarus Gray.  Within minutes of awakening, an assassin dressed as a police officer attempts to kill him, but Gray is more than a match for him and is the victor.  Perplexed at his background, he assumes the name on the medallion and sets about creating a new life for himself as a champion of the underdog, the lost and impoverished while at the same time investigating his own unknown past.
Along the way he acquires three unique followers: Morgan Watts, a once time crook, Samantha Grace, a blonde debutante with both brains and beauty and Eun Jiwon, a Korean martial artists. All three are fiercely loyal to each other and Gray for various reasons and always eager to go into battle with him.  Reese’s ability to define this trio and breathe life into them is deft and although they do represent classic iconic pulp figures, he also injects original personal touches that sets them apart in a truly refreshing way.
Having been a fan of the Rook series from the start, I had come to expect a certain level of quality from Reese.  That this collection totally blew those expectations out of the water was one of the best surprises this reviewer has had in a long while.  “The Adventures of Lazarus Gray” is by far the best work Barry Reese has ever produced and I predict will soon build an even larger fandom than that of his Rook tales.
One point does require mentioning and that is the last story in this volume appears in print for the second time.  It was first printed in “The Rook – Volume Six” and is a team up between the two heroes.  I have no problem with the publisher reprinting the story, but a notice of such should have been made in the book’s indicia.  Which brings about a minor goof because this story was clearly written before the others, although chronologically it appears last.  In this book Gray discovers his true identity as being one Richard Winthrop, yet in “Darkness, Spreading Its Wings of Black” we are told he was Richard Davenport.
Finally let me add this book is a gorgeously designed package with a wonderful cover by graphic artist Anthony Castrillo and superb interior illustrations by George Sellas. So what are you waiting for?  Go pick up “The Adventures of Lazarus Gray,” you’ll be happy you did.  You can thank me later.
Posted by Ron Fortier at 8:48 PM

"The Supporting cast" thing is a trap common to many writers of series. Sometimes it's that the writers are burnt out on the primary character. Others just need to be reminded that the vast majority of Dac Savage books included on Doc, Monk, and Ham, and the other 5 were nearly always busy working elsewhere.