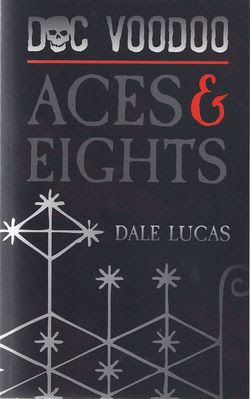 DOC VOODOO
Aces & Eights
By Dale Lucas
Beating Windward Press
201 pages
Last year well known fantasy author Charles Saunders delighted the new pulp community by releasing his novel DAMBALLA, making it the very first pulp novel set in the 1930s to feature an African American hero.  Just this week that same book has been nominated for the Pulp Factory Awards of 2011 for Best Pulp Novel.
Of course good ideas often emerge simultaneously amongst multiple creators and this was the case here.  While DAMBALLA was making its big splash from its widely respected new pulp publisher, Airship 27 Productions, another hard hitting new pulp thriller was debuting from a little known outfit called Beating Windward Press.  This one also featured an African American avenger operating in Harlem, only this one was set in 1926, the heart of the Roaring Twenties.  Written by California based Dale Lucas, “Doc Voodoo” shares several iconic similarities with Damballa to be sure, yet there are also enough differences to define each hero as unique and original in the world of pulpdom.
The hero is a World War One veteran of the famous Harlem Hellfighters 369th Infantry Division named Booker Dubois Butler Corveaux, a practicing M.D. known in his community as Doc Dub Corveaux.  Raised in Haiti and  having traveled the globe during his service years, Doc Corveaux is well versed in the Voodoo Religion and has become the physical agent of three  powerful entities who, when possessing his physical body, imbue it with supernatural abilities that make him virtually indestructible.  Thus in this state, he dons the garb of the Cemetery Man, black clothes, twin .45 automatics, magical clay bombs, a top hat and white painted face to resemble a skull. This frightening entity has assumed the mantle of Harlem’s protector and as we learn in this first book, she needs one desperately.
Two rival gangs are battle for control of the streets and the action is focused on a tough minded woman known as Queen Bee attempting to open a posh speakeasy called Aces & Eights.  Her opponent is a sadistic gang lord called Papa House who will do anything to ruin her plans even if it means unleashing a terrifying magic to corrupt the entire neighborhood and bring about untold suffering and misery.  Into this vicious contest comes the Cemetery Man, guns blazing, determined to thwart that black magic and save the innocent souls caught in the crossfire.
Dale Lucas is a superb writer with an eye for period detail. His research is meticulous and he knows New York from one end to the other, painting a virtual setting that is truly authentic for its period.  His command of slang and mood of the times pulls the reader into a world in flux, a world caught between the past horrors of the first world conflict and the heady exuberance of a social order challenging the mores of the future.
And like any classic pulp tale, the pacing is fast, the characters brilliantly etched and the action non-stop.  This is a true page-turner that will have you cheering with each new gun battle, from this new pulp hero’s first appearance to his last.  And Lucas wisely leaves the finale open ended for many more sequels, all of which we eagerly await.
“Aces & Eights” is as good a pulp actioner as any other there on the market today.  It’s one and only flaw is its packaging.  Most new pulp publishers are aware of the demands of the genre in regards to marketing.  True, one cannot judge the contents of a book by its cover, but then again, one can’t sell a good book with a bad cover.  “Aces & Eights” isn’t so much a bad cover as a non-existent one.  The tiny image of a white skull and a little color design manipulation do not make a great pulp cover.  I would argue this book would have won lots more attention had it sported a traditional pulp painted front, visually debuting Doc Voodoo in full regalia, guns firing away.  So please, Dale Lucas, if you do indeed have more of his wonderful adventures in store for us, give your packaging the extra attention it really deserves.
Posted by Ron Fortier at 11:49 AM

It certainly is that, Rick. A truly entertaining read for pulp lovers who like fresh characters and fast paced action.