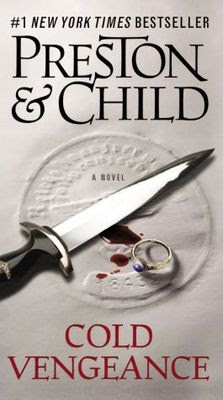 COLD VENGEANCE
By Preston & Child
Grand Central Publishing
448 pages
One of my favorite new pulp series on the market today is the Special Agent Pendergast series by Douglas Preston and Lincoln Child.  I’ve stated many times in past reviews, if Clive Cussler’s hero Dirk Pitt is truly a modern take on Doc Savage, the Man of Bronze, then Pendergast is as close to a real life Shadow as we are ever going to get.  What makes Aloysius Pendergast so unique is his expertise in both modern sciences and arcane mystical practices.  First introduced in the book “Relic” the gaunt looking agent with the silver tinted eyes became an instant hit with action-thriller fans and rightly so.
Over the years and in his multiple, totally mesmerizing adventures, the authors have parceled out stingy pieces of the character’s past life; most of which have dealt with his youthful days growing up in New Orleans.  Now the pair has launched a truly masterful trilogy which delves into the one of Agent Pendergast’s most intimate and heart-wrenching experiences, the tragic death of his lovely wife Helen.  With their opening volume, “Fever Dream,” we learned that her tragic death, while on their honeymoon safari in Africa, was in fact a coldly executed murder.  By the end of that book Pendergast and several allies, including New York Detective D’Agosta, had run afoul of a deadly group of pharmaceutical doctors hiding on a foreboding island in the middle of the Louisiana bayous.  In a climatic finale, Pendergast learned the man responsible for his wife’s death was in fact her own brother, Dr. Judson Esterhazy.
As “Cold Vengeance” begins, Esterhazy, aware Pendergast suspects him, attempts to assassinate him while on a hunting trip in the forsaken moors of the Scottish highlands.
But killing Pendergast is never easy and in the end the villain must flee, but not before revealing to the F.B.I. agent that the entire death of his wife was a ruse and that she is still very much alive.
Thus begins the cat and mouse chase that propels us through this second chapter.  Not only is Pendergast after Esterhazy, but he also launches an obsessive quest to find Helen.  As both paths continue to frustrate him, what he is unaware of is Esterhazy’s own desperation has brought him to an immutable conclusion; the only way to stop Pendergast is to cease running and lure him into a trap.  The frantic Esterhazy seeks the assistance of a shadow organization that has in fact been the manipulators of the past events and possesses a diabolic secret whose routes lie in the ruins of Nazis Germany.
Reading this books is addictive, so be forewarned should you pick one up.  You’ll soon be like this reviewer, hooked for the duration.  “Cold Vengeance” is a riveting masterpiece of suspense skillfully balanced with pulse-pounding action galore.  The only negative point is how fast one arrives at the cliff-hanger ending, which is pure torture.  The third and final chapter of this saga is entitled “Two Graves” and for this reviewer it just can’t get here fast enough.
Posted by Ron Fortier at 1:59 PM