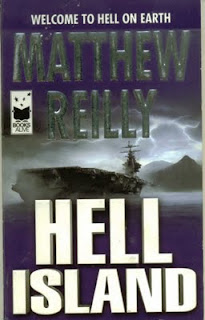 The biggest criticism labeled at today’s most successful thriller writers is how long their books are. Most critics, and readers, are well aware that today’s writers are coerced by the publishers to deliver big, fat books to help justify the $8 to $10 price tag they then affix these mass market paperbacks. So, because of economic reasons, we readers have to dig through pages and pages of padding not vital to the actual plot of these action orientated pot-boilers.

Which is why discovering Australian writer Matthew Reilly was like a breath of fresh.
Reilly’s writing is totally reminiscent of the best of the old pulp scribes. His books are short, lean and simply the purest form of pulp writing on the market today. He doesn’t waste a single sentence, let alone a page, on telling us the characters’ thoughts, emotions, backgrounds or anything else for that matter that stands in the way of the action. Reading his stuff is like eating the leanest hamburger you’ve ever had. It’s not steak by any means, but it’s damn good regardless.

In HELL HOUND, a government weapons experiment on a secret island in the South Pacific has gone horribly awry. When the aircraft carrier Nimitz goes to investigate, it suddenly goes off the Pentagon’s radar, along with the six hundred marines on board. The military quickly sends in four crack recon teams made up of various units from Seals to Airborne Rangers to discover what has happened on Hell Island. The second these squads arrive, they are attacked by a horror beyond imagination and soon are battling for their lives.

The Marine team is lead by Captain named Shane Schofield, nicknamed the Scarecrow. He's the toughest badass in the world and he’s not about to go down without a fight, no matter how overwhelming the odds against him and his team. At 108 pages, this is a book you will most likely devour in one sitting. Then again, once you’ve begun, I dare you to put it down. In Australia these are called Short Novels, and if most of them are as much fun as this one, it’s a format I wish American publishers would consider adopting.

There’s no padding in HELL ISLAND. Only action, 108 pages of it. That should be cause of enough for you to find a copy. Amazon and other major book distributors handle it, and other Reilly titles. Then buckle up for a real thrill ride.
Posted by Ron Fortier at 11:29 AM

So glad you enjoyed this one. You don't hear Reilly's name come up too often in pulp circles and yet he's the closest bestselling writer working today to the grand old pulp tradition.

But we need those thick techno-thrillers to read on those long airline flights...

Amazon has Hell Island listed for $280 or $28.00 for a double book that includes Hell Island and Ice Station.

I may have to hold off on picking up a copy.

Andrew, you are right. His style is totally pulp inspired. As for those long flights, emb021, sometimes a good "fat" thriller is worthwhile.
and Joel, you're right, get a Reilly double. Otherwise you'll really be getting ripped off on U.S. prices for this small books.

A word of caution: I haven't seen the amazon version but I've read that it is a simplified version of the story intended for those struggling with illiteracy. Your best bet is to get the book from ebay. The cover Ron put up is the cover of the "real" book. I think there's a white cover version as well and that's the altered text. Also, on ebay you can grab the book for about $6-$7 - a considerable savings.

I haven't read it yet, but about six months ago, I picked up a copy of a Matthew Reilly book called THE SIX SACRED STONES because the heroes are described as "Jack West and his loyal team of adventurers" and I wondered whether he was consciously invoking Doc Savage. Sounds like he is.

One of my favorite Matthew Reilly books is his standalone adventure TEMPLE. The Shane Schofield books are also a lot of fun, and I've been hoping that Hell Island would eventually make its way into print here in the States.

What Reilly is really doing is writing GI Joe comics in prose. His action is over the top, his saves routinely defy the laws of physics...but there's never a dull moment.

Amen, Sean. Your analogy to prose GI JOE comics is dead on. In fact that's exactly how this book read.
Still tons of fun and I am going to pick up more of his titles for sure.

I have to revisit Reilly. I was a big fan of Temple and felt okay about Scarecrow and Area 7. But I felt he went a little too "WAHOO!"
with the Sacred Stones book. I guess I'll have to try it again sometime when I'm in more of a GI Joe kind of mood.