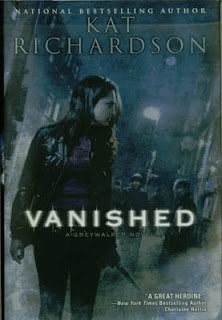 Harper Blaine is a Seattle based private eye. She is murdered and then resuscitated, i.e. brought back from the land of the dead. But upon reawakening to the world of the living, Blaine discovers her death-experience has left her with the unique ability to walk through the grey realities that exist between life and death, ergo she has become a Greywalker. From that point on, her life is never the same and she soon begins encountering all kinds of devilish creatures both among the dead and the living, ala zombies, vampires and other assorted monsters. Who ever thought Seattle could be such a ghoulish center of activity.

Honestly, this series is simply a terrific, well envisioned saga that moves from novel to novel with a growing essence of urgency surrounding Blaine and the people who inhabit her strange world. Perhaps it is the book’s one and only flaw that it is an integral part of a series and if you haven’t picked up the first three, you might find yourself in over your head. Understandable. On the other hand there is so much to relish and savor in this book, you just might want to go out and find those other three.

VANISHED opens with Blaine being confronted with ghostly apparitions warning her about her past and the secrets held by her deceased father. She’s soon on a plane winging her way to Los Angeles to visit her mother and begin the process of unraveling both her father’s death and the true origins of her own abilities. Somehow the two are tied together in a twisted, complex mystery and her trip only confirms without providing any substantial answers. Just when she’s reached the end of her limited clues, Blaine is summoned back to Seattle by Edward Kammerling, the head of the city’s vampire colony. Although they are old allies from previous adventures, Blaine doesn’t trust the businessman bloodsucker and is wary of his demands.

Kammerling confesses that his financial holdings in London are being threatened by unknown forces and that his vampiric agent there has disappeared without a trace. Leary of sending one of his own kind, who would be recognized immediately, the crafty vampire wants Blaine to take on the assignment. It is a request she would have easily declined days earlier, but on the flight back home, Blaine experienced a horrifying dream wherein her old boyfriend, Will Novak, is in mortal danger by demonic forces. Will currently resides in London with his younger brother. Not believing in coincidences, when Kammerling explains his troubles and puts forth his offer, Blaine is convinced she has to go to London if only to find Novak and make sure he is safe.

Of course the dream is prophetic and by the time Blaine sets foot on British soil, all hell breaks lose and the action kicks into high gear and never once lets up. Richardson’s work is always straightforward, like a razor blade slash, clean and deadly. She creates amazing situations, forever putting Blaine through one harrowing challenge after another, yet controlling the plot with a truly deft imagination. From water born demons to a blind old Greywalker and a fiendish super-vampire whipped up by a Jewish sorcerer, VANISHED packs more action in one book than do many others in five. It’s a roller-coaster ride that will have you cheering and turning pages until your fingertips have blisters.

And the bloody prize at the end is the book is just a prelude for lots more to come in the life of Harper Blaine, Greywalker. I’m signing on now. You should too.
Posted by Ron Fortier at 1:09 PM

Sounds like something Dean Koontz would have written back in the day.

Agreed. Richardson is a good write capable of keeping the plot moving at a good clip, much like Koontz did with his earlier thrillers.