TWO FOR THE MONEY 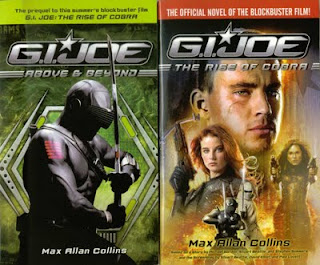 G.I.JOE –Above & Beyond
By Max Allan Collins
Ballantine Books
260 pages.

G.I.JOE – The Rise of Cobra
By Max Allan Collins
Based on Movie Screenplay
Ballantine Books
259 pages

If you are an avid reader and also love movies, the novelization of a movie script into a book is like having two deserts served up on one platter. Max Allan Collins is no rookie when it comes to adapting movie screenplays, he did Saving Private Ryan, Airforce One and American Gangster. When approached at the San Diego Comic Con last year to turn the script of this summer’s latest toy to mega-hit blockbuster, G.I.JOE, into a paperback novel, Collins opted to up the ante and deliver not one, but two books to aid the cause. It was an extremely wise idea on his part, as I’ll explain.

Films, like books, are generally told in three acts, the opening, the middle and the climax. The opening is used to introduce the characters and supporting players. Once established, the story evolves to the middle, where heroes battle villains or whatever obstacles might exist to thwart the protagonist. All of which culminates in the third act, the major confrontation and its resolution, leading to a fade out or simply the words; the end.

The Achilles heel of an action adventure movie is that it cheats on the opening. Hollywood producers today are anxious to get to the fights and battles and with each new film we are given less and less information on the background and motivation of the characters. Thus we end up with two dimensional characters going through the motions. Hardly engaging or demanding of our time and attention. Collins may never publicly admit it, but this sacrificing of the opening act is one of the major flaws of the movie script for G.I. JOE – The Rise of Cobra. Throughout the book the people who dreamed up the story strategically placed several truncated flashbacks intended to make up for that flaw. Sadly they are so brief that they only pose more questions than they answer.

Collins somehow convinced the studio people to allow him to take these skeletal flashbacks and from them build an entire body of prose which would become a proper prequel, clearly defining all the characters and also adding weight to the crucial mysteries that are revealed at the end of The Rise of Cobra. The result of that request was G.I.JOE – Above & Beyond, a book that takes it time introducing us to Duke Hauser, Ripcord Weems, General Hawk and all the terrific Joes who make up this special, international strike force established by the U.N. to take on only the most critical assignments. In Above & Beyond we learn how Duke and Ripcord met, became pals and then came to the attention of G.I.JOE. We also learn the true origins of Cobra’s leaders which adds tremendously to the pay-off reveal at the end of The Rise of Cobra. Initially I had planned to simply pick up the movie novelization, but because I’m familiar with Collin’s work, I was aware that he doesn’t pad anything, his story telling simply smart and complete. For him to have opted to do this prequel meant it was important to the whole and so it is. With the prequel, G.I.JOE – The Rise of Cobra becomes a something more than merely a cartoon movie adaptation. Without it, well, save your pennies for the movie itself.
Posted by Ron Fortier at 12:34 PM

That's something I'd like to get into - tie-in stuff. Max is so varied in his output, currently reading Black Hats.

One book I have on my to-buy list right now. I can imagine novelizations would bring all kinds of new, creative challenges. Hope you get the chance some day.