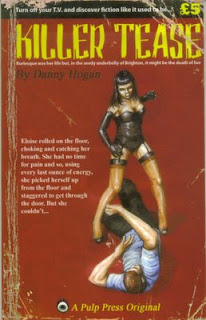 It happens regularly that I’ll get an e-mail from a new publisher asking me to review one of their titles in the hopes of increasing their visibility in the marketplace. Such was the case when a received such a letter from the good folks at UK’s Pulp Press. I decided to take a few seconds to check out their website (http://www.pulppress.co.uk/). I came away with a feeling that here were a bunch of talented young creators eager to set the publishing world on fire by bringing back the fast-paced, punch-in-the-groin pulp paperbacks of the 1950s. Sort of their version of our own Hard Case Crime. I let them know I’d be only to happy to read anything they sent along. A week later this slim little book arrived in the mail.

Eloise Murphy is an aging dancer who believes she’s experienced all the ups and downs life has to offer. Having been inspired by the classic “tease” dancers like Belle Starr and Gypsy Rose Lee, Eloise is disgusted with the new anything-goes mentality of the current lap-dancers taking over all the gentlemen’s clubs. When she gets fired for being too old fashion, it leaves her in a depressed state and ripe for targeting by a very secretive outfit in town.

A wealthy businessman owns a unique, private club and wants Eloise to come and work for him. When, during her interview, she is given a set of photographs depicting dark events of her past, the truth about the set-up is revealed. She is being blackmailed into performing for a group of cruel, sadistic men who relish inflicting pain on women. The violence is quick and vicious and by the end of her first encounter, Eloise is left bruised and battered, what whatever little decency she had left completely obliterated.

She then becomes deadly and sets out to claim bloody vengeance against those who have used her. As the violence escalates from page to page, I found myself recalling all those exploitation B-movies of the late 60s and early 70s. Writer Danny Hogan is a capable craftsman whose prose is extremely lean and he doesn’t waste a line or paragraph about anything other than Eloise’s fury and the hell she brings down on her enemies. This is a short book which can easily be finished in an hour or two. But don’t let that fool you. It may just be the most enjoyable reading hour you’ve spent all year. Finally a word of caution, this isn’t for the squeamish. You’ve been warned.
Posted by Ron Fortier at 6:09 PM