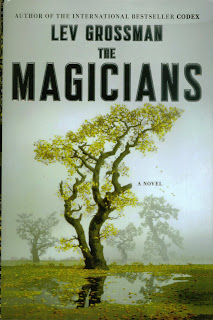 Long ago, while in high school, I read two coming-of-age novels that stayed with me for the rest of my life. Both were as different as books could possibly be. One was an assignment, the other of my own choosing. TO KILL A MOCKINGBIRD by Harper Lee and THE CATCHER IN THE RYE by J.D. Salinger brilliant captured the obscene vulnerability of youth and the horrors of adulthood as played out against two different settings; on an urban maze of loneliness, the other a southern community filled with backwoods racism. Since reading those two books, I’d not found another voice so rich in describing the adventure and confusion that is growing up in America until now. THE MAGICIAN, like those earlier books, tells that same journey; only its route is one of magic and fantasy.

Quentin Coldwater is a young New Yorker about to enter college. An only child of disinterested middle class parents, the one joy in his life to this point has been a series of fantasy novels set in a magical land called Fillory. Think Narnia and you’ll be quickly brought up to speed. On the eve of his entrance interview for Harvard, Quentin enters a cold winter alley in Brooklyn and emerges in the woods of upper New York State on a warm summer day. He has traveled to a school of magic known as Brakebills, where he is informed that he posses such arcane skills and if he can past the curriculum, he will be trained to become a real magician. Here the reader will most likely envision Harry Potter’s Hogsworth. But the similarities are few, as Grossman paints Brakebills as an imperfect setting for lost children frantic to find their place in a world they feel constantly alienated from. They are a jaded group of loners and even a wondrous school of magic cannot completely eradicate their self-imposed ennui.

At Brakebills, Quentin finds love and friendship and eventually the grandest surprise of all, Fillory actually exist and he and his chums discover the magical means to travel there. But alas, every Eden has its serpents and the fantasy world that so comforted him as child soon becomes a hellish nightmare with a monster like none other he had ever imagined. Through his trials, Quentin sacrifices much and endures great pain before coming to grip with life’s most difficult challenge, making sense of it all.

Grossman’s tale is part coming-of-age fable and part philosophical dissertation on what the nature of life might be. If there is a God, he posits, then perhaps he, or she, is the Great Writer of All, and Quentin, like the rest of us, must eventually come to the realization that we are all characters in some cosmic book. It is up to each of us to decide whether we are the heroes, villains or merely supporting players. Quentin has to stop giving the past unwarranted importance and stop believing the future holds some pot of gold happiness, if only he can reach it. In the end he learns to accept that immortal Now, which as Thorton Wilder once wrote, is only captured briefly by poets and saints. Grossman may not be a saint, but with THE MAGICIANS, he clearly establishes his poetic sensibilities. This is a book I will not soon forget.
Posted by Ron Fortier at 5:39 PM