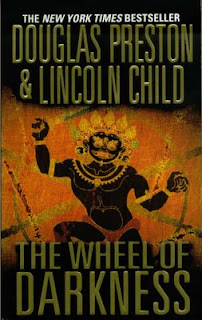 Since his first appearance in the team’s book, RELIC, Special Agent Pendergast has rapidly evolved into one of fiction’s most unique and appealing action heroes. I’ve always maintained that there is a modern version of most of the classic 1930s pulp heroes. We’ve all known from his debut novel that Clive Cussler’s Dirk Pitt was our new Doc Savage and all his subsequent adventures have born that out. I’d like to suggest that Pendergast is our new Shadow. He’s as original and mysterious a crimefighter whose greatest asset is his brilliant mind and encyclopedic knowledge of everything under the sun. I think the late Shadow scribe, Walter Gibson, would have been a huge fan of these books. They are pure pulp heaven.
Posted by Ron Fortier at 1:35 PM

Interesting about your comments of these sort of 'modern pulp characters'.

I've found myself reading more and more of the 'techno thriller' works in recent years, especially continuing series. I do think they have many of the styles of the early pulps.

I got into Cussler's in the late 90s or so, I think when I read on-line of a sort of connection/inspiration from Doc. I've been reading all of Cussler's stuff since.

I also go into the Pendergast (and other works by his creators) stories, and have enjoyed them. Douglas Preston's stand along novels have been using the character of Wyman Ford, who is interesting.

Some others I've enjoyed:

James Rollins. His initial works many times tied into 'lost worlds', tho I felt a lesser author to Cussler. Of late, most of his works have been about 'Sigma Force', an interesting science strike team of DARPA commandos. He also wrote the latest Indy novelization. He does give Doc Savage as an inspiration to him.

Jamed DuBrul's own geologist hero, Philip Mercer I find very interesting. Sadly, he hasn't been able to get out a lot of novels of him.

Thanks for stopping by Michael, and your own observations. In launching their new Gabriel Hunt series, publisher Charles Ardai told a New York con crowd this would be the first such "new" pulp hero. As I was fortunate to be sitting on this panel with him, I took hold of my own mic and immediately corrected him, detailing the many such "new" pulp heroes we've been entertained by all these years. And I finished with saying, pulp heroes never went away, they just got modern.