THE STAR OF KALEEL 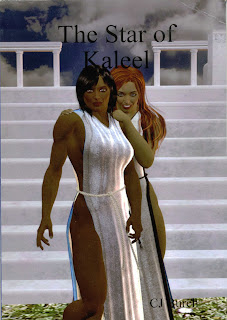 The old adage says you can’t judge a book by its cover. That’s true, unfortunately what that saying fails to take into account is, you can’t market a book without a hell of a nice cover. It’s not that readers judge a book by its packaging as much as attractive covers are more likely to attract attention. Which is why C.J. Burch’s self published adventure, THE STAR OF KALEEL, gets a very bad deal here. Had Burch been able to acquire the services of people who know art and graphic designing, I am positive his work would be getting a wider audience.

THE STAR OF KALEEL is a sword and sorcery tale that is competently written, presents fresh ideas and settings and offers up two really great characters at its center. Karim and Maleeva are vicious, professional gladiators in the pits of Solon, where they fight and die for the entertainment of the populace. Karim is the older, wiser of the two, whereas the younger Maleeva desires to take her place as the number one fighter in the pits. Both are soul weary of their lives and when they are offered a job as agents of a wealthy female politician, they see it as their one chance to escape their hellish lives.

The plot is simple enough and a familiar one to readers of this genre. Somewhere in a desert outpost between the east and the west, a power jewel is buried, hidden away hundreds of years ago because of its dangerous powers. The Star of Kaleel is said to be able to destroy entire nations, maybe all mankind, with a simple thought. Now a madman named Hafad is after the jewel for his own dark ambition and Karim and Maleeva are sent to stop him and steal back the jewel for their patron.

Burch moves the pace along at a good clip and the writing never gets bogged down. The characters are fully sketched and as a reader I found myself quickly caught up in their circumstances. Most readers expect to find male heroes in this kind of adventure, thus having two beautiful, deadly women instead is a refreshing change. Burch explores the women’s lives and feelings towards each other in a very delicate and mature fashion, eschewing a prurient approach a lesser writer could easily have been tempted to follow.

Thus, in the end, he delivers a solid, enjoyable adventure that I’m very happy to have discovered. This is a very good book that deserves your attention and support. Go to Lulu.com and punch it up. And please, as I said at the start of this review, don’t be put off by the cover. Yes, it is crude and amateurish, but what’s inside is anything but.
Posted by Ron Fortier at 9:00 AM

It sounds worthwhile. My own first novel has a lousy cover, but this is what I got for trying to describe my concept of it over the phone to a graphic artist.

Unless you've worked with a particular artist before, that's exactly what's going to happen every time. Considering all the people out there self-publishing these days, I think most of them would be better served to simply find a nice, solid font and not have images. Just a title and author credit will get the job done without creating negative vibes that arise from poor artwork.