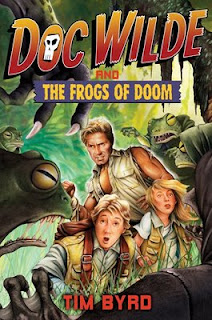 The trail of the missing senior Doc leads our group to the South American jungles of Hidalgo, as yet another well known name from the Savage canon. The innocent fun of this book, which is a Young Reader’s offering, is that it does not attempt to shy away from its origins and is a worthy pastiche for all Doc Savage enthusiasts. Byrd is having a grand time offering us a satisfying what-if adventure that rings true from start to finish and left me wanting more. All the trappings and clichés of the hero pulps are here, but presented in such a fresh and carefree manner, the reader will be swept away by the outlandish exploits performed by this one-of-a-kind family. The Wildes are old fashion heroes in the best sense of the word and their adventure is sure to thrill pulp fans, both old and new. Don't miss it!
Posted by Ron Fortier at 11:42 AM