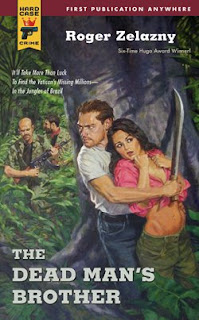 This is not the best such book I’ve read and there were places I wished the author would have quickened the pace. No writer ever wants to limit his or her range and that Zelazny had a crime book in him is no surprise. Still, it comes nowhere near the originality and daring of his science fiction work, in which he excelled. In the end, neither a success or failure, THE DEAD MAN’S BROTHER seems a personal experiment he needed to get done, which I suspect is why he never pushed getting it published. Thus it now surfaces as a literary oddity and that may truly be it’s only worth.
Posted by Ron Fortier at 7:56 AM