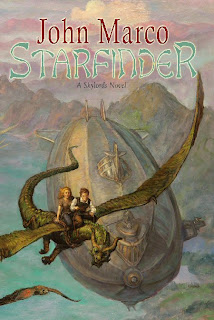 From the first page to the last, this book weaves an incredible tale filled with truly amazing characters; beautiful mermaids, wise dragons and brave warrior centaurs. Each is brought to life with deft, sure strokes and the story propels itself gracefully along much like the giant airship at its center. Before Moth and Fiona can achieve their goal, they will have to grow up fast, face many dangers and bear the heartache of sacrifice and loss. STARFINDER stands leagues above similar fantasy books. It is the first of a new series and if subsequent sequels are this good, then sign me up now. This is a journey this airman is very eager to get started.
Posted by Ron Fortier at 12:36 PM

Ron, thanks for the awesome review! I'm both happy and humbled by it. Much obliged.

My sincere pleasure, John. Now get busy on that sequel.