WHEN ALL SEEMS LOST 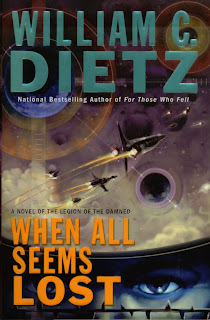 Several pages into this sci-fi military adventure, I found myself comparing the plot two of my favorite war movies; The Bridge on the River Kwai, and the recently made, The Great Raid. Elements from both are borrowed in this tale of futuristic warfare, heroism and self-sacrifice. The book is part of a series labeled The Legion of the Damned, but none of the previous chapters are needed to appreciate and enjoy this one.

In this future, mankind is part of union known as the Confederacy of Sentient Beings and is at war with a bug-like race known as the Ramanthians. Good sci-fi military books require traditional set pieces to be effective, among these are large scale outer space battles. When All Seems Lost opens with a dandy. The Ramanthians have managed to deploy an ambush around a known hyper-space exit point and when Confederacy warships begin appearing, they brutally decimate them one after the other. Aboard the flagship of this doomed fleet is none other than the President of the Confederacy and as his ship comes under fire, it looks like he will either be killed or captured by bugs; the latter course much more damaging to the Confederacy. As a high level prisoner, the President could be used by the enemy to extort certain concessions from the administration, concessions that would prove extremely harmful to the war effort.

Then, at the last minute, a savvy diplomatic assistant suggest disguising the President’s identity from their captors. This would allow him to go undetected among the other POWs until a hopeful rescue mission could be launched. The President agrees to the subterfuge and orders the captain of the ship to surrender. Thus begins the ordeal of the Confederate survivors. They soon find themselves on a harsh, hot and humid jungle planet and put to work aiding the Ramanthians in building a space elevator. Which is where the similarities to the Bridge on the River Kwai come into play.

Back in the 1980s, comic book writer Chuck Dixon wrote a sci-fi war series for Marvel comics called, Alien Legion. The idea was to imagine an organization created on the model of the French Foreign Legion, which was made up of rogues and villains from all nationalities and became one of the most fearsome fighting forces the world has ever known. Dietz works that same idea in this series and the primary hero of this mission is Legionnaire Captain Antonio Santana, who is asked to lead a suicide rescue made up of inmates from a Confederate military prison. So you can say he even throws in a little bit of the Dirty Dozen for good measure.

To say this book has it all would be a gross understatement. Good and evil cyborg warriors, alien politics on a grand Machiavellian scale, and episodes of gut wrench bravery as the POWs fight with their hearts and minds to protect their leader and at the same time sabotage the enemy’s goals. The pacing is brisk and never lets up and the characters so wonderfully etched that I came to care for them and their fates. The battle sequences are powerful and effective and the book races its way to a completely satisfying climax. This was my first meeting with Dietz’s Legion of the Damned, but you’d better believe, it won’t be my last. Hooyah!!